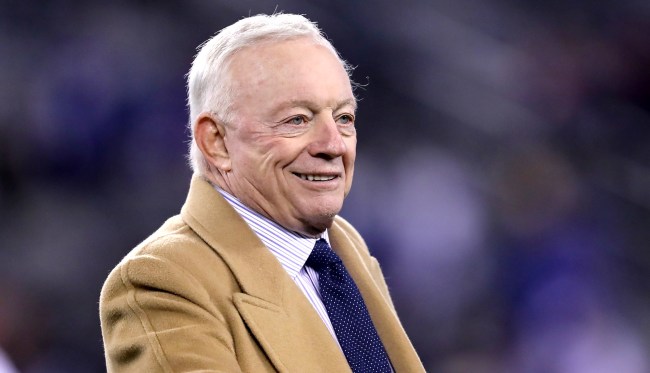 Dallas Cowboys owner Jerry Jones, who opposes kneeling during the playing of the national anthem yet says he wants his players to “make this a better place,” is very concerned that if any of the Cowboys’ players decide to protest when the NFL season kicks off this weekend, the team will lose some of its fans.

During this week’s appearance on 105.3 The Fan, Jones once again shared his thoughts on the possibility of Cowboys players kneeling during the anthem or performing some other sort of protest during Sunday night’s game at the new SoFi Stadium in Los Angeles.

“That is a huge issue. Huge. You know, by just the nature of the way that I run the team, how much I appreciate the interest that’s in the Dallas Cowboys. A lot of it is just interest because they want to see us get beat, but still, the big interest is there. I’m very sensitive to that. That’s exactly why I’ve said that I want our players to be very sensitive to just how important it is to the majority of our fans- more than any other team, the majority of our fans- how sensitive they are, recognizing what this great country is and what this flag stands for.

“Everybody knows where I stand. And there’s no equivocation there at all. I feel fortunate to be a part of an entity, the Dallas Cowboys, and a sport that has that much interest. Consequently, I want everybody to understand that if any player that is standing out there has a serious, serious, serious awareness of the kind of sensitivity there is there and they ask for help with that in mind, in a way that you would ask for help. It’s not good to be obstreperous or anything if you’re asking people to see it through your eyes and see it in your way. It’s important to show the kind of grace.

“I’m very confident that on both sides – our players as well as our fans – that we can come together for grace. It is all about trying hard to move the ball forward, to see where the other guy is coming from. Not necessarily to agree, but to see where he is coming from. I hope the Dallas Cowboys can be part of that, just because that’s of interest in what we’re talking about this morning.”

Based on recent comments by the Cowboys’ star running back Ezekiel Elliott, Jerry better get used to losing some fans, because despite it sounding like no NFL players will actually sit out, it does appear that more than one Cowboys player plans to protest.

The likelihood of NFL players following the lead of NBA players and boycotting a game over social injustice appears remote because, some believe, their voices are finally being heard by owners. https://t.co/rw4yAPLoYP

Elliott also said, “I think everyone in the locker room feels that we’re going to get support from ownership, coaching staff and from each other. I think everyone is going to feel free to express themselves however they choose to.”

I guess we will see about that, won’t we?