Jerry Jones, Who Opposes Kneeling, Says He Wants Cowboys Players To ‘Make This A Better Place’ 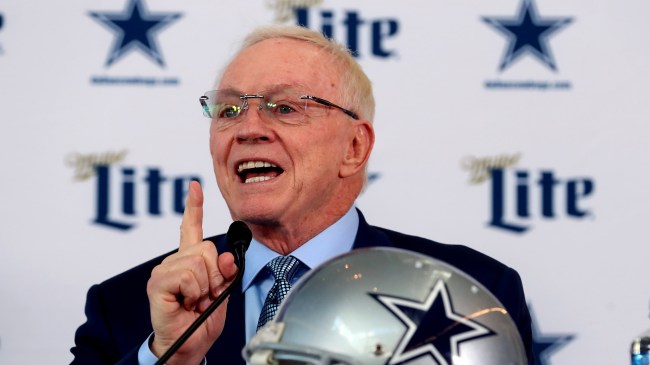 Jerry Jones, when asked on Friday about the current movement to curb social injustice and promote more racial equality, says he wants the Dallas Cowboys organization and its players “to play a part” and “make this a better place.”

Certainly an interesting take from one of the few sports team owners who has refused to allow any of his players to kneel in protest during the playing of the national anthem and who, for the most part, has stayed conspicuously silent during the numerous Black Lives Matter protests that have been taking place across the nation.

“Our hearts go out to those affected by these times, these disheartening times,” Jones told 105.3 The Fan on Friday. “I want our team to be emboldened to be a part of change. The dramatic change isn’t going to happen overnight, but I want our organization and our players to play a part in the movement of making this a better place in this country. I feel confident that our players have a can-do and what-can-I-do participation in it. I want the Cowboys to help make this a better place.”

This past Tuesday, Jones said he was seeking a compromise of sorts with regard to the national anthem protests, and looking to do something similar to what the Cowboys and Jones did vs. the Cardinals in 2017 when they kneeled before the playing of the anthem, then stood as it played.

When asked by ProFootballTalk.com about Jones’ stance against Cowboys players kneeling during the playing of the anthem, the NFL said that it had no comment.

Commissioner Roger Goodell recently said that he understands the reasoning for the kneeling and supports players peacefully protesting in this manner. However, thus far the league is leaving it up to the individual teams, like the Cowboys, to enforce whatever rules they see fit.

Cowboys coach Mike McCarthy, who did not cancel any of the team’s practices this week, said after Thursday’s session the team held a meeting to discuss the current events. Jerry Jones was not present.

Mike McCarthy said Cowboys owner Jerry Jones did not attend Thursday's 2:45 p.m. team meeting; he was out of town. McCarthy added Jones will be "involved in the near future, and I know the players are looking forward to the interaction." Stephen Jones, other execs were there.

Jones also told 105.3 The Fan on Friday that he anticipates the Cowboys having up to 50 percent capacity at AT&T stadium when the NFL season begins.

“We know where our boundaries are and I think the official boundary is at 50-percent capacity,” said Jones. “More than likely there won’t be 50-percent capacity, but if things are thriving, I would imagine we could have as many people out there as far as the demand to be out there as we want to. We’ll see how the lay of the land is as we get closer, and sell those numbers of tickets accordingly.”

The Cowboys first opponent in 2020, the Los Angeles, are among the 20 NFL teams that have already said they will not have any fans in the stadium when their seasons begin at home.

When asked if it was fair for the Cowboys to have fans at their home games while so many other teams will not have that advantage, Jones responded, “Absolutely.”