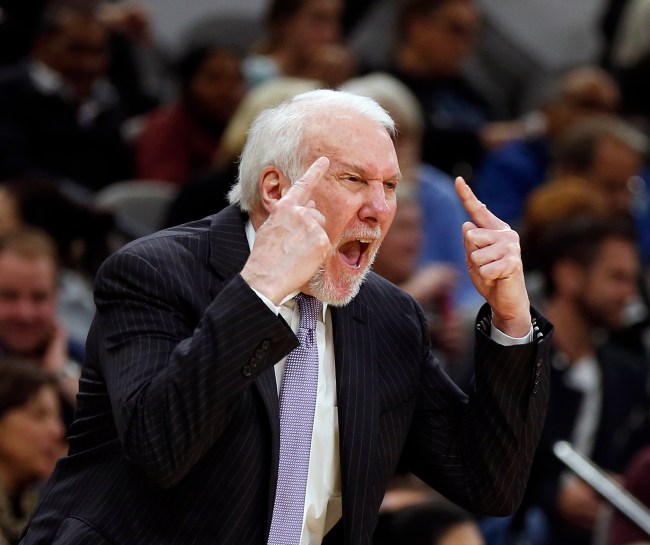 San Antonio Spurs head coach Gregg Popovich isn’t just one of the best to ever do it, but he’s also one of the most outspoken and progressive leaders in all of sports. Remember, Pop is the same guy who hired Becky Hammon as an assistant coach back in 2014 — the first full-time female assistant coach in any major pro sports league in North America — and the five-time world champion head coach has also served as a leader amongst his peers when talking about sensitive (yet important) social issues, so Popovich isn’t one to sit back and follow others’ lead.

So it shouldn’t come as a major surprise what Gregg Popovich recently said during a New York Times piece which asked him about the current state of the country, specifically focusing on the Black Lives Matter protests that are going on in different cities around the nation (and world).

Interviewed by columnist Maureen Dowd, Popovich was candid about his feelings, speaking of the hypocrisy he’s seen and heard from prominent figures and sports organizations. In fact, he specifically called out — and absolutely buried — both Jerry Jones and Robert Kraft, owners of the Dallas Cowboys and New England Patriots, respectively. While Jones and Kraft have released statements about the protests, Popovich was quick to slam them for previous $1 million donations to Donald Trump’s Inaugural Committee. Here’s what Pop had to say regarding those donations and how they contradict any action around current issues.

“It’s just hypocritical,” Popovich told The New York Times. “It’s incongruent. It doesn’t make sense. People aren’t blind. Do you go to your staff and your players and talk about injustices and democracy and how to protest? I don’t get it. I think they put themselves in a position that’s untenable.”

Although Popovich comes down hard on both Jones and Kraft for their support for Trump, it’s important to note that the former did kneel with his players during the national anthem prior to a 2017 contest, and the latter has donated $1 million to local charities to fight for equality and end systemic racism; so it’s not as if they’re turning a blind eye on the topic. However, it is a little hypocritical by both billionaire owners on what they support or believe in.

Also, this isn’t the first time Jones has been torched about the topic, as fans mocked him following the Cowboys’ recent statement, and showing how hypocritical he sounds.

As for what Gregg Popovich has been doing to try and better connect with his players and staff, he mentioned how important it is to gain trust and create open dialogue to better understand who they are, where they grew up and try to even empathize with some of their experiences.

But in recent calls with the Spurs’ players and staff he has been amazed at the level of hurt.

“It would bring you to tears,” he says, his voice cracking. “It’s even deeper than you thought, and that’s what really made me start to think: You’re a privileged son of a bitch and you still don’t get it as much as you think you do. You gotta work harder. You gotta be more aware. You gotta be pushed and embarrassed. You’ve gotta call it out.”

Given the importance of the issues being protested, it comes as no surprise that some NBA players are talking about boycotting the league’s approved return next month, stating they’re willing to sit out in order to keep protesting. Who knows what might happen when all is said and done, but it’s a bold idea.