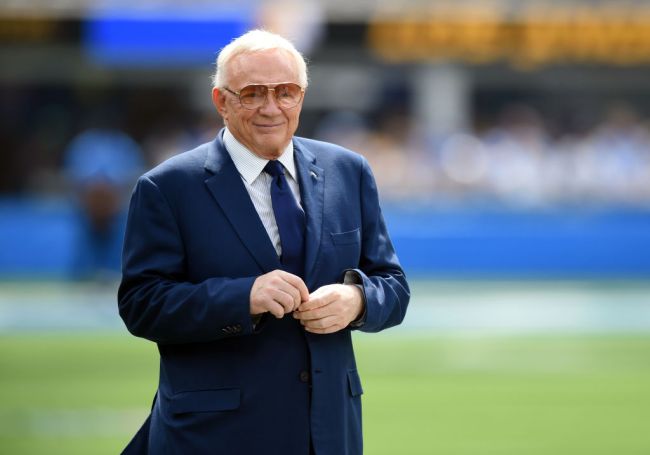 The NFL’s investigation into the Washington Football Team – the same one that found the emails from Jon Gruden that led to his departure from Las Vegas – is over. That’s what league commissioner Roger Goodell is saying, at least, as he seems determined to not release any other findings from the investigation.

According to Goodell himself, the investigation looked at close to six million documents. With just that simple bit of information alone, NFL fans and even higher-ups with the league want to see what all was discovered. With six million documents, there have to be more notable findings, but it appears that the case is closed.

While most people out there are upset with Goodell shutting the door on this, Dallas Cowboys owner Jerry Jones is happy about it.

Jones was asked to share his thoughts about the NFL’s handling of the WFT investigation and he gave a two-word response, saying that he’s “very satisfied.”

NFL fans were quick to call out Jones for his remark. The majority of people on Twitter made the assumption that Jones is happy about the investigation being over because nothing negative came out about him or the Cowboys.

no s* Jerry is satisfied …. even more reason for the findings to become public https://t.co/7K08Ypq2gJ

650,000 EMAILS BEING HIDDEN BY NFL'S ROGER GOODELL..ALL THE DIRT ON THE REDSKINS TRAFFICKING WOMEN, SKETCHY THINGS THAT WENT ON WITH RECENT TEAM MOVES …BUT HE ONLY RELEASED THE BS ON GRUDEN, OUT OF ALL 650,000 EMAILS?..ALL BECAUSE HE CALLED HIM NAMES? GOODELL IS HIDING THE DIRT https://t.co/OSVk3q6p3z

Proof you know something is wrong https://t.co/QvakKlJGvm

Sounds like a guy with a TON of emails and various communications to be worried about https://t.co/kK5UYTKWye

Related: Ex-WFT Employees Accuse NFL Of Covering Up Sexual Assault, Demand All Emails Be Made Public

This isn’t the first time Jones has talked about the investigation. Back in mid-October, just after Gruden’s emails were leaked, Jones gave a nonsensical take about the matter at hand.

“I know everybody you’ve been reading about. They’re outstanding proponents of our game,” Jones said. “We all continue to recognize what a spotlight you’re in and the way we should express ourselves.”

While Goodell may say this is the end of the investigation, it certainly feels like there’s more to come here. Whether it be in the coming weeks or months down the road, the whole situation still seems far too fresh to completely close the door on.