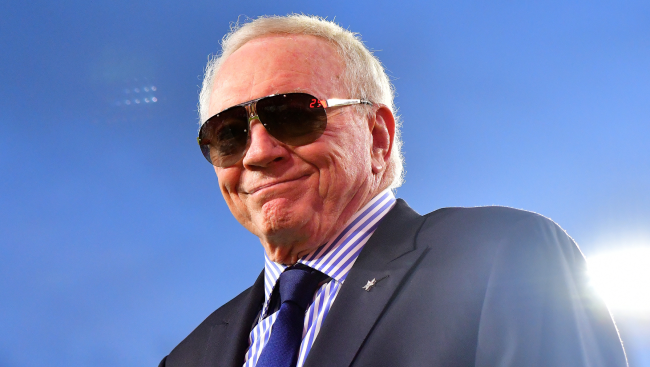 As more and more news comes out regarding the now former Las Vegas Raiders head coach Jon Gruden and his behavior while working for ESPN in the early 2010s, one of the leaders in the NFL, Dallas Cowboys owner Jerry Jones, was asked for his take on the situation.

During his appearance on 105.3 The Fan on Tuesday, Jones gave a response that many NFL fans had a very hard time deciphering.

“I know everybody you’ve been reading about. They’re outstanding proponents of our game,” said Jones. “We all continue to recognize what a spotlight you’re in and the way we should express ourselves.”

Huh? What does that even mean?

Then, when asked if he believed Jon Gruden deserved to lose his job because of the information that’s come out this week, Jones gave this answer.

“We are talking about people here, and even the ones that some of the comments were directed about, those have been outstanding people in the NFL.”

It’s like Jerry Jones is speaking in code, or some kind of word jumble where you have to take all the words he said and move them around until you create a few coherent sentences.

Fan and media reaction to Jones’ comments, or lack thereof, was swift and, as one might expect, very pointed.

What kinda word salad was that? Guarantee this guy has tons of emails that are just as bad if not worse than what Gruden got caught with

That will get some polarising responses after events earlier this year.

Just read Jerry Jones' comment" "I know these people. I know everybody you’ve been reading about. They’re outstanding proponents of our game."

One can be an ambassador of a sport, but make hurtful comments about people in the sport.

These concepts are not mutually exclusive.

This statement seems like Jerry might think there are some negative emails involving him. Playing it safe.

Jones is probably aware, and if he isn’t, he should be, that an untold amount of NFL fans on social media almost immediately called for Jones’ emails to released once they heard the news about Gruden.

DO JERRY JONES NEXT @NFL

If Daniel Snyder doesn’t get touched by this whole (and every other) investigation into the Washington Football Team, there’s no WAY Jerry Jones will.