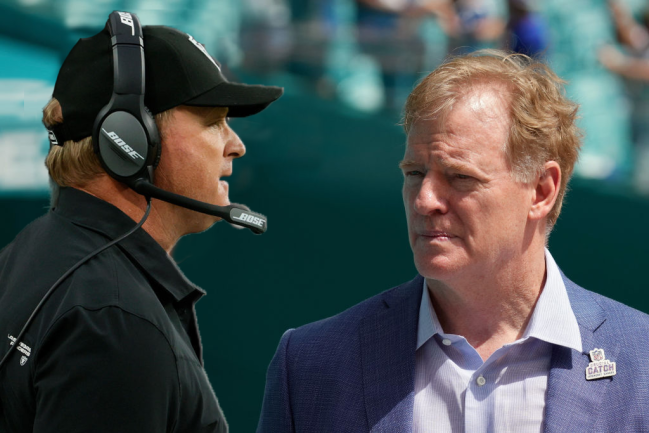 Jon Gruden is out in Las Vegas over hateful emails. The messages were primarily sent during the NFL’s lockout and include multiple racist, homophobic and misogynistic tropes.

The emails were discovered as part of an on-going federal investigation into former Washington Football Team trainer Ryan Vermillion.

A report that came out on Friday shared that Gruden openly mocked NFLPA executive director DeMaurice Smith. Gruden did not step down until there was a second leak that included a much larger, more expansive portfolio of his emails.

And yet, he knew they were coming. Gruden told ESPN that he was aware of multiple emails out there — including one targeted at NFL commissioner Roger Goodell — and still chose not to resign.

He said it himself, just this past weekend.

Among those caught in the crossfire, Gruden admitted to ESPN’s Chris Mortensen, was Roger Goodell. In one of the emails that was provided by the league to the Las Vegas Raiders last week, Gruden reportedly disparaged the NFL commissioner with a vulgar description.

We now know exactly what he said about Goodell. It was not good.

And yet Gruden still chose to remain the head coach of the Las Vegas Raiders?!?! He really went down with his ship.

Here is what he said on Sunday:

“I was in a bad frame of mind at the time [in 2011], and I called Roger Goodell a [expletive] in one of these emails too,” Gruden told ESPN. “They were keeping players and coaches from doing what they love with a lockout. There also were a lot of things being reported publicly about the safety of the sport that I love. I was on a mission with high school football [in the Tampa, Florida, area] during that time, and there were a lot of parents who were scared about letting their kids play football. It just didn’t sit well with me.”

The expletive of choice was not released by ESPN, but now we know he said a homophobic slur.

In addition to the direct shots at Goodell, Gruden’s emails also included insults toward multiple owners that were involved in the 2011 labor disagreement. The disagreement ultimately led to the lockout.

A league official would not tell ESPN how many emails were turned over to the Raiders. It seems like quite afew.

Gruden, who was working as the lead analyst for Monday Night Football at the time, guessed that he knew of five to seven emails that were flagged by the NFL. The NFL said that it was looking into potential disciplinary measures, but Gruden was not employed by the NFL nor any of its teams when he sent the emails in 2011.

He has ultimately resigned, so it won’t matter anyway.