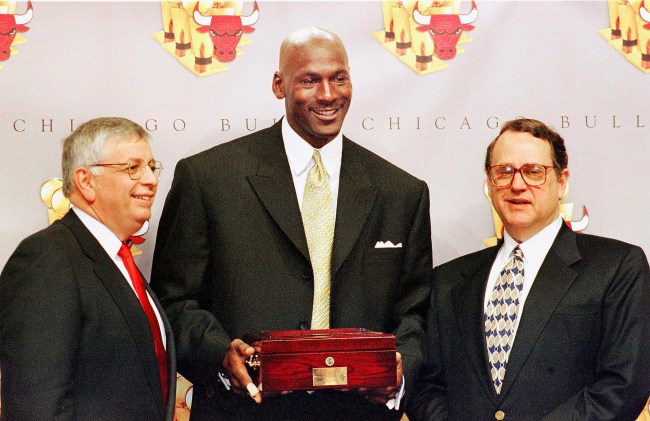 Chicago Bulls owner Jerry Reinsdorf saw his decision to buy the NBA franchise for a mere $16 million in 1985 really pay off by the end of the ’90s. That’s because, as we all know, the team ended up becoming the crème de la crème of sports organizations around the world, winning six championships in eight seasons with a star-studded cast featuring Hall of Fame talent like Michael Jordan, Scottie Pippen, Dennis Rodman and head coach Phil Jackson.

But, like all things, the Bulls’ run came to an end after the 1998 season when Jackson dubbed the run for a sixth championship as “the last dance,” which became the title for the recent ESPN documentary featuring a behind-the-scenes look at Jordan and his teammates’ during those title years.

With the Bulls going out on top in 1998, there was always one question that had to be asked but could never be answered: Could Chicago had won a seventh title that decade had MJ, Pip, Rodman and Jackson all returned in 1999? It’s something Jordan talked about in Episode 10 of The Last Dance, claiming he thought the team could’ve absolutely competed for a championship that year had Jerry Reinsdorf and the team’s GM, Jerry Krause, not broken things up.

It’s easy to look back now, over 20 years later, and say with conviction that the Bulls would’ve at least put themselves in position to win a seventh championship during that 10-year stretch — because egos aren’t as inflated and players, coaches and the front office aren’t living in the moment of the situation becoming a reality. But is there truth to MJ’s claim about the the core of the roster coming back for another run? Jerry Reinsdorf sure as hell doesn’t think so.

In a conversation with NBC Sports Chicago following the final episode of The Last Dance, Reinsdorf absolutely shutdown the notion that Jordan and his star-studded running mates would’ve considered coming back after the ’98 season. In his own words, they were “gassed” because of the toll that sixth title run took on them, and he even showed displeasure with MJ even suggesting to put all the blame on the owner and his front-office for not trying to make one more run at it.

“I was not pleased. How’s that?” Reinsdorf told NBC Sports Chicago in a phone conversation, when asked for his reaction to the scene. “He knew better. Michael and I had some private conversations at that time that I won’t go into detail on ever. But there’s no question in my mind that Michael’s feeling at the time was we could not put together a championship team the next year.”

“OK, let’s take that hypothetical. Scottie had Houston offering him a multi-year contract. You think he would’ve turned that down to come back for one year? I don’t think so,” Reinsdorf said. “Dennis Rodman had gone beyond the pale. As it turned out, he played 35 games after that (in his career). Luc Longley was on his last legs. If we had brought that team back, they were gassed. Michael had been carrying that team.”

It should be said that, while Jerry Reinsdorf does disagree with Michael Jordan’s claim from The Last Dance, he did tell NBC Sports Chicago during his interview that his relationship with the GOAT is “great,” adding, “I love Michael. Michael is terrific,” so this isn’t a case of decades-long bad blood between the two.

That said, while Jordan still has that competitive fire and a major “what if…?” regarding a possible run at a seventh title with the Chicago Bulls in 1999, Reinsdorf sure as hell doesn’t agree that there was any chance MJ’s teammates or head coach could’ve been convinced to come back — despite his efforts to persuade them otherwise back then.