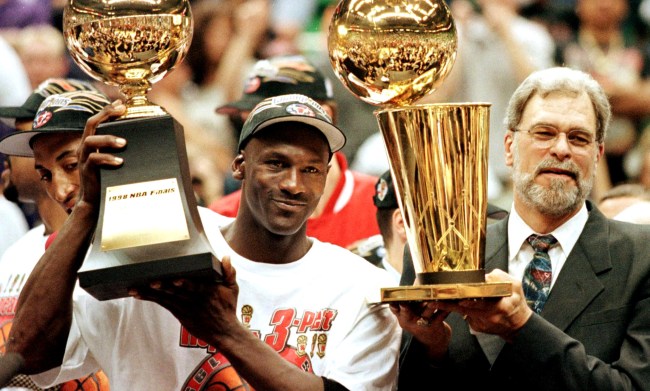 By now, anyone with an ESPN subscription is becoming very familiar with the infamous negotations, or lack thereof, that took place between coach Phil Jackson and general manager Jerry Krause at the tail end of the Chicago Bulls’ run of six NBA championships in eight years.

Jackson would go on to take one year off, and upon his return to coaching with Los Angeles proceeded to reel off yet another three-peat in his first three season coaching the Lakers.

With The Last Dance fresh in everyone’s minds, Jackson’s agent, Todd Musburger, recently sat down with The Athletic’s Shams Charania to discuss what actually happened during those failed negotiations with the Chicago Bulls.

Some highlights of the interview include Musberger elaborating on whether or not there was any chance Phil could have returned for at least one more season.

“There was never an offer. It was a statement of apparently Mr. Reinsdorf’s intent, for whatever reason, but it didn’t happen. They may feel that they made a sincere statement, but that’s not how we remember it. I’d be able to tell you what they offered him — we don’t forget things like that. But it’s all cool,” recalled Musburger. “It was known Phil was moving on after that season. The team was blown up by management.”

It should also be noted that in letting Jackson go, Bulls management, for all intents and purposes, ended the NBA career of The GOAT. Jordan, like Jackson, also did not participate in the 1998-1999 season, sitting out until making a best forgotten return in 2001 playing two seasons for the Washington Wizards.

Musburger added, “Mr. Reinsdorf did say to the press and apparently mentioned to Phil, at a conversation that I wasn’t present, ‘Hey, you can come back.’ But the decision had already been made: Phil would not return. Krause announced this at the beginning of the season and made that clear time and time again.

“Starting a negotiation by saying, ‘This is the last contract your client will ever sign here,’ I can tell you: That was sincere. They meant it.”