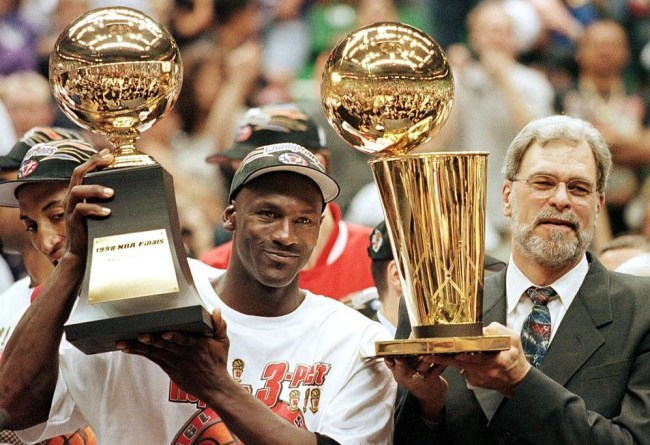 If you were to ask essentially anyone with a modicum of basketball knowledge about who played the biggest role in helping the Chicago Bulls dominate the NBA in the historical fashion that they did in the 1990s, you’d be hard-pressed to find anyone who wouldn’t point the finger at the man who used the majority of the decade to establish himself as possibly the best player of all time.

Sure, you could make the argument that Michael Jordan wouldn’t have been able to achieve what he did without Phil Jackson holding the clipboard on the sideline and there’s little doubt he was the Belichick to MJ’s Brady. With that said, I don’t think he would’ve been able to win six championships if he’d had John Starks as a shooting guard instead.

There are some fans out there who might not even recognize his name but you also have to give some credit to Jerry Krause, who was lucky enough to land a job as the general manager of the Bulls shortly after Jordan took his talents from Chapel Hill to Chicago.

Krause had previously worked as a scout and put his knowledge to good use during the draft in 1987 by scooping up a couple of notable contributors in the form of Scottie Pippen and Horace Grant. He’d also had his eyes on Jackson since The Zen Master caught his attention while playing college hoops in the 1960s and it’s safe to say his decision to bring him aboard worked out pretty well.

However, the relationship between the two men gradually began to deteriorate as Jordan got closer and closer with the coach, and on Thursday, the legend revealed Krause’s hatred of Jackson resulted in him deciding the season documented in the upcoming The Last Dance would be his last one in Chicago before it even got underway.

Jordan shared what happened during an appearance on Good Morning America and recounted Krause had informed Jackson he could lead the Bulls to an 82-0 record and still not be invited back to coach another year, which was a poorly calculated move on his part if he was trying to retain his star player based on where his loyalties lay (the anecdote begins at the 1:30 mark).

His Airness decided to retire following that season before making one final comeback we probably could’ve done without but you can’t help but wonder what could’ve been if Krause had handled things differently.