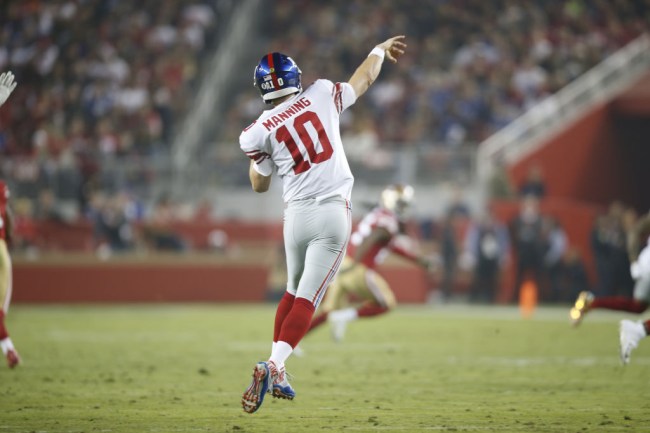 Eli detractors will point to the fact the 37-year-old has thrown 234 career interceptions and holds a ‘meh’ career record of 113-110 all-time.

One of those detractors is Hall of Famer and arguably the best wide receiver to ever play, Jerry Rice. Rice appearanced on 95.7 The Game and was asked whether he believes Manning deserves to be in the Hall of Fame, he answered bluntly:

Rice claims that people get too caught up in the metrics and don’t examine what the quarterback can offer over extended periods of time.

“… when I’m judging a player, I’m looking (at) what he brings to the table. What I see with Eli Manning, there’s not consistency.”

“Yes, he has two Super Bowls, but then you look at Drew Brees and what he has accomplished and all of that. I think in yardage now he’s the leader. He’s doing great things for that team, and that team is getting better as they go. You can tell he’s a great leader and he makes everybody around him better.”

“So, I would think that Drew Brees is going to be a shoo-in. Eli? There’s a chance of him getting in, but I’m not going to say he’s a true Hall of Famer.”

Eli is a unique case, a Hall of Fame toss up. What you guys think?