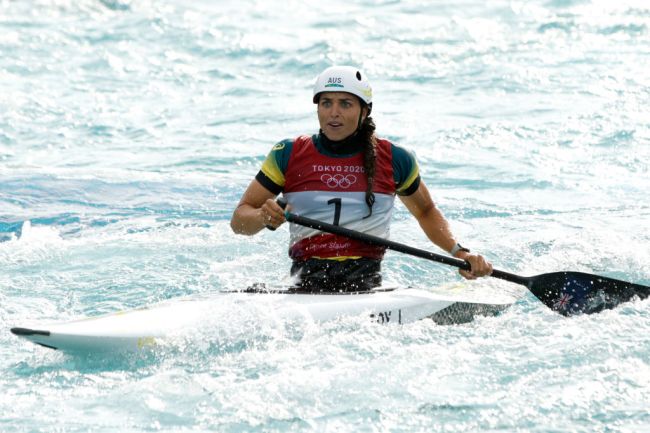 Sex amongst athletes in the Olympic village is rampant and it is no secret. As such, the host country typically gives out more than 100,000 condoms to the participating Olympians for their extracurricular endeavors.

Solving a conundrum with a condom.

This year, however, the contraceptive supply became even more valuable than birth control. Aussie kayaker Jessica Fox used the condom supply to save her Olympic dreams and win a medal.

Fox, a 27-year-old who hails from the loins of two Olympic canoeists, competes in the K1 slalom event. She won a silver medal in 2012 and a bronze in 2016.

Entering Tokyo, the expectation was that Fox would podium for the third-straight Games. However, he dreams were almost dashed when nose of her kayak was damaged.

In an act of quick thinking, Fox and her team slapped a carbon finish on the front of the kayak. Needing something to hold the mixture in place, they used a condom to wrap the nose.

The tradition of giving out condoms dates back to the 1988 Olympics in South Korea, at the height of the HIV and AIDS scare. This year, amid COVID-19 canoodling amongst the athletes is being discouraged, but it’s inevitable.

“Our intent and goal is not for athletes to use the condoms at the Olympic Village, but to help with awareness by taking them back to their own countries,” the Tokyo Olympics Organizing Committee said in a statement.

Fortunately for Fox and her kayak, Tokyo still provided the condoms. She scored the fastest time in the K1 final and came close to winning gold, but penalties forced her to settle for bronze.

Less than 48 hours later, Fox and her condom-fixed kayak were back in the water for the C1 final. Fox won gold and made history.

At her 3rd Olympic Games Jess has completed her set of Olympic medals and creates history as the first ever Women’s C1 Olympic Champion!

None of this would have been possible without a condom.