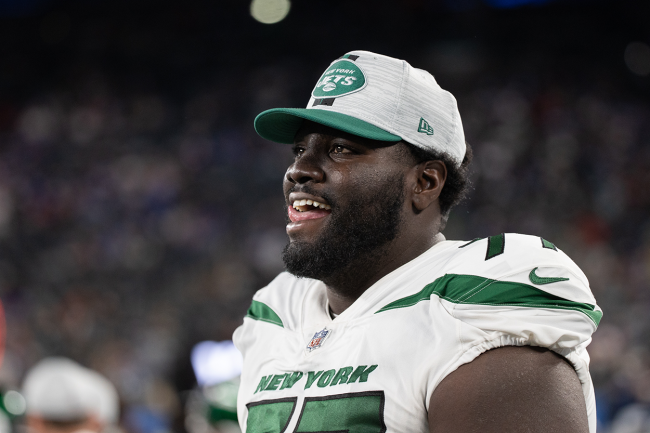 Despite the fact that Mekhi Becton has played exactly one (1) full season in the NFL, there is a lot of doubt around his career. The former No. 11 overall draft pick is out to prove the haters wrong.

Becton, who received First-Team All-ACC honors in 2019, stands 6-foot-7, 365 pounds. He is a very large man, but his insane offseason workouts are enough to crush mortal men and his athleticism is remarkable for his size.

And his first year in New York showed a lot of promise. Although there were moments where he got beat, Becton looked like someone who could blossom into a long-term mauler and protector of the blindside.

However, his second year in the NFL did not go as planned. It was over pretty much before it began.

Becton suffered cartilage damage to his knee that required surgery and ended his year. It was disappointing for all parties involved, but such is life.

In the aftermath of his surgery, Becton reportedly reached a weight of nearly — or greater than — 400 pounds. As a result, he has received quite a few “bust” labels during the offseason and people are already counting him out, even though he has only played 15 career games.

Becton hears the noise and is set out to make all of the people who doubted him look silly. He spoke with the media on Wednesday and said that he plans to make them “eat their words.”

Mekhi Becton doesn't understand why he's been written off by some people. His goal?

"I'm going to make them eat their words" pic.twitter.com/k27YFktIr9

That, however, only sparked more jokes.

The dude can eat. No one’s questioning that

Everything comes back to eating with this guy

If he don’t eat em first

The chirps might keep coming, but they only fuel Becton’s fire.