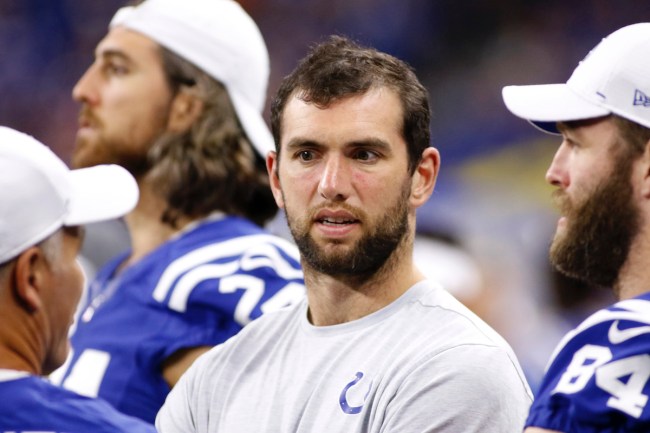 I imagine August 24, 2019 was a very difficult day for Jim Irsay. That was the day the owner of the Indianapolis Colts arrived at his team’s stadium thinking he’d just be watching a preseason game against the Chicago Bears, but, out of nowhere, was stunned with the news that franchise quarterback Andrew Luck would be retiring at the ripe age of 29 years old.

Understandably, the entire sports world was shocked by Luck’s decision. The former No. 1 overall pick had proven to be one of the greatest talents in the NFL, and, not yet 30, was just about to hit his peak. But the quarterback’s heart wasn’t in football anymore, so he boldly walked away — much to the chagrin of some jackass Colts fans who booed him walking off the field.

Like any great athlete who retires early, there’s always some discussion about a return. Whether it’s a legit possibility, or just something mysteriously made up by fans hoping for it to happen, in the case of an Andrew Luck comeback, it doesn’t seem likely. And for Jim Irsay, he’s still just getting over the fact that Luck is gone.

Talking to NFL.com this week, Irsay discussed his emotions after hearing the initial news about Luck. He was also asked whether a comeback could be happening — which the billionaire Colts owner coming across as depressed just talking about it. Take a look at what Irsay said below.

“I sometimes wonder if that was just a bad dream I had,” Irsay recalled Tuesday. “It’s just very, very, very difficult.”

“Coming back? I don’t know. He’s pretty happy in retirement life. He’s just enjoying it and enjoying it with his daughter, Lucy.

“I don’t think we will (see him). He’s just enjoying himself. I’m happy for him.”

When further pressed about an Andrew Luck comeback, Irsay doubled down, and made it sound as if the quarterback is thinking about things way more important than football.

“I mean, anything’s possible, and he’s still friends with the organization, and we all still have contact with him,” Irsay said. “Some of the guys, like (left tackle) Anthony Castonzo or T.Y. know a lot more than some of the newer guys. But look, he was a great player and everyone has to go down the path they think is right for them and their family, and you always respect that.

“So, I love Andrew, I wish him well. He’s raising his daughter, Lucy, and I just hope for him to have an incredible life and that sort of thing. But I don’t see it coming back around. If it did, then great, that’d be a great story. You know, Jordan was gone for two years and then back.

“But it seems a lot longer. I can’t personally believe that it’s only a year and a half ago that it happened. I mean, it seems like five years ago, it really does … a long time ago. So I don’t really see that being a possibility, but you never know.”

For Jim Irsay, just thinking about Luck retiring has to strike a nerve. The entire Colts organization changed when the quarterback decided to walk away, and, in the 1.5 seasons since, the team’s still on the hunt for the future face of the franchise, having gone through Jacoby Brissett and currently Philip Rivers.