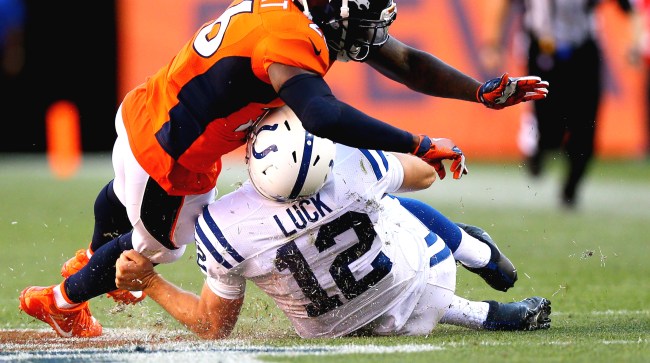 When Indianapolis Colts quarterback Andrew Luck abruptly announced his retirement from playing in the NFL a lot of fans held out hope that it would only be a temporary thing.

After all, at the time of his announcement, Luck was still only 29-years-old, was coming off of perhaps his best season as a pro, the Colts were coming off a 10-6 season with high playoff hopes for 2019, and was still owed $24.8 million. (The Colts went ahead and said they were going to pay him anyway, even after he retired.)

On the flip side, Luck had already earned over $109 MILLION during his 8 NFL seasons, he had suffered injuries severe enough to force him to miss one full season and over half of another, so retirement probably sounds pretty good to him right about now.

Wednesday, Andrew Luck’s dad Oliver Luck, the CEO and Commissioner of the XFL, was interviewed on The Dan Le Batard Show about some of things we can expect to see from the new/old football league.

At the end of the interview, Oliver was asked, “Do you ever expect to see your son play in an NFL game again?”

His response was, “I don’t believe so. My wife and I spent some time with him over the holidays. He and his wife had their first child. He’s very happy. I didn’t notice any hankering to get back out on the field.”

When asked, “How about the XFL?” Oliver replied, “Ditto.” So much for that rumor.

Of course, if Andrew Luck were planning to make a return for say, a team like the Las Vegas Raiders in 2020, I am guessing that asking his dad about it is probably not the person who is going to drop an exclusive bombshell like that in the media.

After all, back in August Andrew Luck told the media, “I can’t see the future, but I very clearly in my mind see that I won’t [change my mind and play again],” which was NOT 100 percent confirmation that he wouldn’t ever play in the NFL again.

Q: "Say, a year from now when the ankle is finally healed, would you [consider coming back]?"

Andrew Luck: "I can't see the future…I very clearly in my mind see that I won't." pic.twitter.com/cfRufBJPtq