For Some Reason, ProFootballTalk Started A Rumor That Andrew Luck Will Be Playing For The Raiders In Las Vegas In 2020 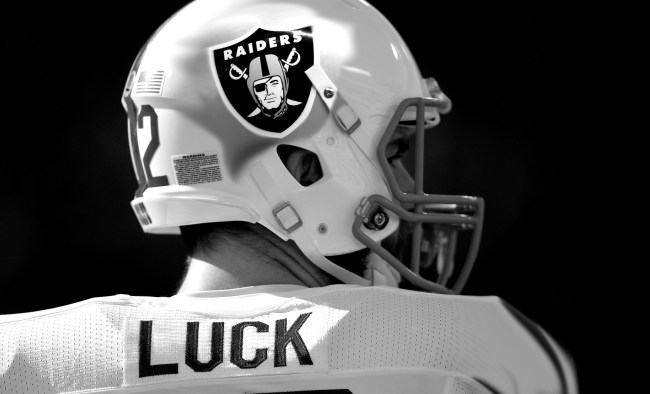 A lot of very odd things have happened during the 2019 NFL season, but arguably the most unexpected thing to occur was Andrew Luck suddenly announcing his retirement at the age of just 29-years-old (and angering Colts fans in the process).

When it happened it took all of two days for speculation to begin that Luck would be taking his talents to the XFL when the league kicks off in 2020 in large part due to the fact that his father Oliver Luck, a former NFL quarterback in his own right, is serving as the commissioner of the new edition of the league.

While there was really no chance of that ever happening (right?), there is now a new rumor being floated by none other than Mike Florio’s ProFootballTalk.com that has Andrew Luck calling the signals for the Raiders when they move to Las Vegas in 2020.

“I have absolutely nothing to base this on whatsoever, but I continue to have a weird feeling that Andrew Luck could be the Week One 2020 starting quarterback of the Las Vegas Raiders,” read the tweet.

I have absolutely nothing to base this on whatsoever, but I continue to have a weird feeling that Andrew Luck could be the Week One 2020 starting quarterback of the Las Vegas Raiders.

Now why, oh why, would someone with the connections Florio and his web site has, would they put out such an outlandishly unsupported hypothesis? Do they know something that we don’t and just aren’t admitting it? Or is this just flagrant speculation put forth by a normally trusted source of NFL insider news?

Needless to say, this wild statement caused quite a reaction among ProFootballTalk’s Twitter followers.

This is ridiculous but I'll play along 😂. Luck at this point ain't worth more than a an early 3rd, maybe someone would give up a late 2nd. If he's gonna do that he'll go to the Bengals.

I wake up thinking I'm going to win the lottery each day too...

I have absolutely nothing to base this on, but, I believe a terminator style robot will be sent from the future to the present day to QB the Patriots to the Super Bowl so that, in the future, the machine overlords can defeat us at Bo Jackson’s Techmo Bowl and enslave humanity.

Are we playing football Mad Libs? "I continue to have a (adjective) feeling that (Random Quarterback) could be the Week One 2020 starting quarterback of the (Random NFL Team).

As always, PFT just yells random crap that is in no way true and could never be true, but will begin to say they've got "sources" that confirm it in a few weeks. See: Kyler Murray

As I always say…

And this ain’t it. Right?