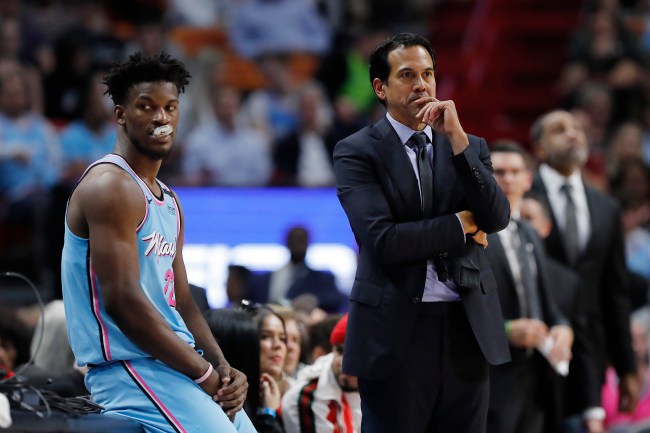 On Friday, NBA insider Shams Charania claims he has heard that Butler has some “very testy moments behind the scenes’ with Heat coaches and players this season.

"I'm told there has been very, very testy moments behind the scenes between Jimmy and that coaching staff."

Our Insider @ShamsCharania and former NBA champion @imanshumpert discuss the back and forth between Jimmy Butler and the Miami Heat. pic.twitter.com/JURpb0vtbO

“Everyone that knows Jimmy Butler understands this is someone who wears his heart on his sleeve, he’s not afraid to let people know how he feels. This Miami team goes to the Finals last year in the bubble and I think that was a surprise to everyone…I don’t think anyone picked them going into the finals, that adds expectations to this franchise. for Jimmy Butler and how feels like this franchise should go.

I’m told there has been very, very testy moments behind the scenes between Jimmy, that coaching staff, that roster at different points.”

Shut the f*ck up you click bait, ambulance chasing, dirt bag piece of sh*t. No one has told you this because this is not reality. Go find someone’s assistant to text abt an MRI or some other human calamity you want to be 1st on. We are good over here. https://t.co/ER5iAkk0J8

The relationship between Jimmy Butler and the Heat is as healthy as — or healthier than — any of the Heat’s relationships with their stars in the 25 years I’ve covered the team.

Are there disagreements? There are with any star and team. But if you only knew about others.