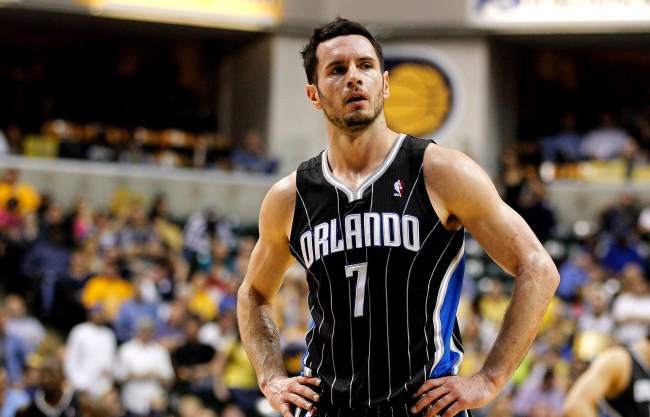 New Orleans Pelicans shooting guard J.J. Redick has had a hell of a career in his 13-plus years in the NBA.

The 35-year-old averaged a career-high 18.1 points per game playing for the Philadelphia 76ers during the 2018-19 season and led the league in three-point shooting percentage (.475) during the 2015-16 season with the Clippers.

So he’s definitely what you’d call a savvy veteran at this point in his career.

That wasn’t always the case, of course.

Coming out of college where he was a self-proclaimed “prick” at Duke, was just like any other rookie after he was selected 11th overall by the Orlando Magic in the 2006 NBA Draft.

And his Magic teammates which included players like Dwight Howard, Grant Hill, Jameer Nelson, Bo Outlaw, Pat Garrity, and Hedo Turkoglu treated him that way, according to a story Redick told this week on his JJ Redick Podcast about some of the savage hazing he went through in his first year as an NBA player.

Reddick explained to his guest on the show, Jrue Holiday, that one time he was late to a practice the vets did their best to make sure it didn’t happen again.

Then the conversation turned to players feeling entitled when they come into the league and not, as Holiday put it when he entered the league, “You were a rookie, you were actually a rookie and there were duties that you had to do and you weren’t like insubordinate and if you were insubordinate there were consequences.”

“Turkoglu beat me up a couple times. I’m not going to lie,” Redick interjected.

“I was a pansy,” replied Holiday. “I did everything.”

Which led to Holiday recounting a story about his hazing.

“Back in the day they had the lady come and talk to us and gave us like the big bags,” he shared, talking about condoms.

“The NBAPA would hire a health professional to come and talk to the teams, and she would bring big a giant bag of about 150 condoms,” Reddick added. “The rookie’s responsibility was to bring that bag to every road trip.”

After some back and forth talking about how things are much different now for rookies, Reddick shared his story.

“The worst thing that happened to me was one day after practice, they asked me to apologize to the team,” Reddick recalled. “I was late to a practice, so, they said you’ve got to sit in front of the team, and you’ve got to explain yourself and apologize. And I said, ‘Okay.’ And I was fully dressed. And I sat in the chair and as soon as I sat in the chair like three guys grabbed me and they duct taped me to the chair. And then they stuck me in the shower and the water was running, it was super cold, and they left it cold. And they sat me in front of the cold water in the shower for like an hour. Everybody left practice and then, like, the equipment manager found me like an hour later.”