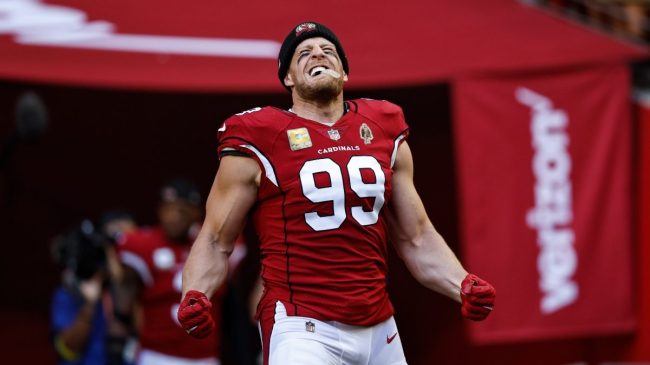 JJ Watt has just one more NFL game remaining. The former Texan and current Arizona Cardinal will finish his storied career on Sunday against the San Francisco 49ers.

And, Watt is a lock for the Hall of Fame. He is one of the best players of this generation and likely will go into Canton on the first ballot.

He won the NFL Defensive Player of the Year award in 2012, 2014, and 2015. His 2014 season was one of the greatest seasons in league history for any player at any position. He recorded 20.5 sacks to go along with an NFL-record 119 pressures. That’s an astonishing 7.5 quarterback pressures a game. He also had five touchdowns that year, three on catches on offense, one on an interception return, and one on a fumble return.

While he never reached those heights again, he remained one of the league’s best and most recognizable players. He currently has 112.5 career sacks and an astounding 69 pass deflections, a ridiculous number for an edge player. For comparison, future Hall of Fame corner Jalen Ramsey has 79 pass deflections.

Watt announced he would retire in late December, citing his young family and health issues.

And, one fan has sent him some interesting fan mail to commemorate his retirement.

Before his time in the NFL, Watt was a walk-on turned star at the University of Wisconsin. The Wisconsin native transferred into the program from Central Michigan and starred for the program before being drafted in the first round, eleventh overall b the Texans in 2011.

One fan thought JJ would appreciate a stuffed badger, apparently.

I have received a lot of wild fan mail over the years.

This package that arrived today is certainly being added to the list. pic.twitter.com/dxBi0rTwHE

That is the most quintessential Big Ten gift I have ever seen in my life. It’s hilarious, and I hope Watt puts it in a very prominent place in his house.

Congrats to the 33-year-old on a great career.