J.J. Watt’s Fiancee Creeping On His Text Messages During The World Series Is The Content The Internet Craves 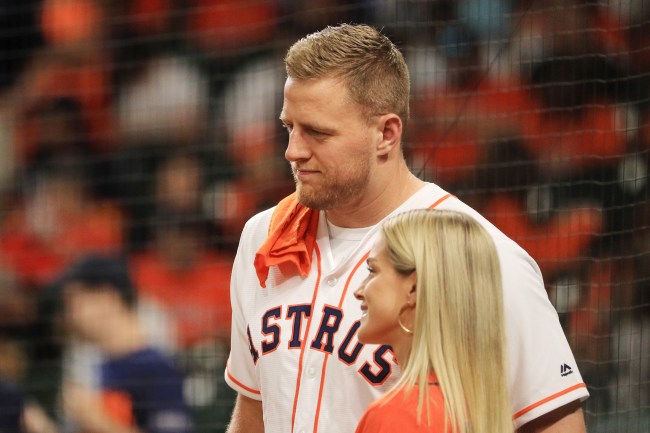 Remember when Lindsay Pelas was thirsting for J.J. Watt in 2015 and urged him to slide into her DMs? And then after a month of radio silence Pelas said “he lost his shot.”

I wanted to strangle J.J. out of respect for every straight man and gay woman on the planet, and was convinced the five-time Pro Bowler would not only never find The One, but didn’t deserve to.

I was wrong, and in May of 2019, the Texans defense guy dropped on a knee to propose to professional soccer player Kealia Ohai, who also happens to be the sister-in-law of Watt’s former defensive brother Brian Cushing.

The pair attended Game 1 of the World Series Tuesday night at Minute Maid Park to watch their Astros catch an L.

The couple was captured by Fox cameras in a clip that proved they have more than just good looks in common: they are both in the running for Defensive Player of the Year.

JJ Watt’s girl making sure no other females are getting the “you up” text tonight pic.twitter.com/UqX2k681Wh

I can just imagine how this exchange went down.

Everybody on the internet has either been the perpetrator or the victim of a side-eye creep.

JJ Watt getting that phone fisheye’d

– She Not Playing No Games JJ @JJWatt 😂😂😂 pic.twitter.com/6JZAH2zWcE

Completely understand the insecurities that come with dating a famous professional athlete. But if he’s unwilling to seal the deal with Lindsay Pelas AND Kate Hudson, I think you’re in the clear for life.