J.J. Watt Says A Ref Actually Told Him He Was Getting Held On A Play And The Guy Still Didn’t Even Throw A Flag 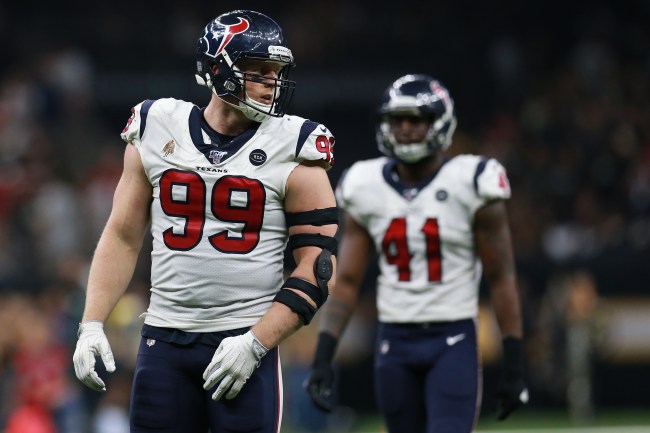 J.J. Watt is a five-time Pro Bowl selection and three-time NFL Defensive Player of the Year, so it’s safe to say he can be a handful for any potential blockers trying to slow down the Houston Texans’ defensive end. And while it’s no easy task trying to do that, holding the dude probably isn’t the way to do it — well, unless you can get away with it.

If you ask J.J. Watt himself about that whole holding thing, he’ll tell you that it wasn’t only happening a lot during his team’s victory over the Jacksonville Jaguars the other day, but he’ll even go as far as saying that a referee saw it happening and still refused to throw a penalty flag. No, seriously, here’s what the behemoth Watt said to reporters after the game, openly complaining about how piss-poor the officiating has become.

“The ref literally admitted to me that the guy held me on one play, and he didn’t throw the flag,” Watt said. “I don’t know what I’m supposed to do with that, when after a play I look over to the ref, and he says, ‘Yes, I saw him hold you. But I didn’t throw the flag.’ I’ll probably get fined for this, and that’s fine. I don’t know what to do with that.

“It’s just part of the game. It’s something I’ve dealt with for a very long time. I literally looked right over at him, and he said, ‘I know. I saw it.’

Now, considering NFL officiating has been miserable for, well, forever, but especially in the first couple weeks of the new season, it’s not out of the question that J.J. Watt is telling the 100 percent truth here. And, if that’s the case, the league has bigger issues than just a few calls that cost teams in Week 2  — like blowing a play dead in the Saints-Rams game, and the terrible roughing the passer call in the Broncos-Bears game. Unlike Watt’s apparent non-holding call, those referee mistakes played a big part in the final outcome.

If J.J. Watt’s revelation here is true, the league absolutely needs to dig into some investigating and figure out which ref told the defender this, and then take swift action. Of course, the NFL is a complete shitshow, so that probably won’t happen, meaning Watt’s just going to have to listen to his own advice and try to deal with it; although he shouldn’t have to.