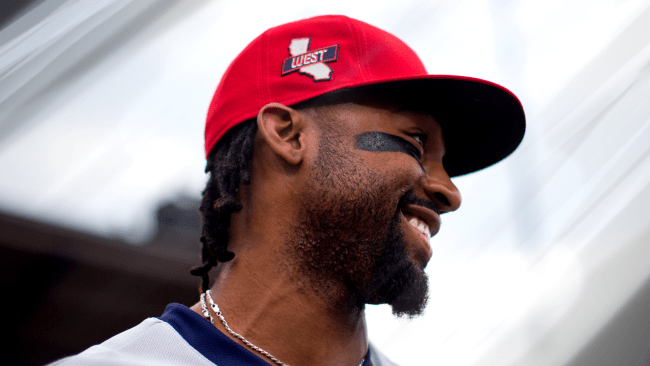 If you have attended a Major League Baseball in recent years then you know that after the outfielders get done warming up by playing catch between innings they almost always toss the ball into the stands so a lucky fan can take home a unique souvenir.

22-year-old Los Angeles Angels outfielder Jo Adell isn’t too far removed from being one of those fans in the stands. Just a few years ago, Odell was playing baseball at Ballard High School in Louisville, Kentucky. Then he was drafted by the Angels in the first round, 10th overall, in the 2017 MLB June Amateur Draft.

Based on his interaction with some fans Wednesday night, he hasn’t forgotten what that’s like.

After throwing a ball into the left field stands between innings during the Angels and Orioles game, Adell accidentally knocked the drink out of a young fan’s hand. No small thing since drinks at Major League Baseball games aren’t cheap.

Rather than just shrug it off or pretend he wasn’t aware that it happened, the next inning when Jo Adell headed out to warm up in left field he brought something special with him: an autographed bat for the young Orioles fan.

Angels outfielder Jo Adell threw a ball up in our section the previous inning and knocked a kids drink out of his hands. Next inning comes out with a bat for the kid. Classy guy @Angels @MLB pic.twitter.com/Yt7mdIwKug

As you can see in the video, Adell stuck around long enough to pose for a photo with the fan as well.

Thanks @Angels and Jo Adell for the bat! New favorite player pic.twitter.com/auk8DJ8ltN

The fan wrote about his interaction with Jo Adell later on Twitter.

“Jo Adell went above and beyond last night,” the fan tweeted. “He made my year and I will always remember this moment. This is what baseball is about.”

Fans from around the world, as they should, absolutely loved it.

Well done mate, watched this in Australia today..lot of class by Jo and you. Great stuff.

And that’s how you make a fan for life

Another guy who gets what it means to be a big leaguer!

It takes very little effort to have class and be a good human being. Good stuff here...

Looks like the Angels roster is just filled with super nice guys.