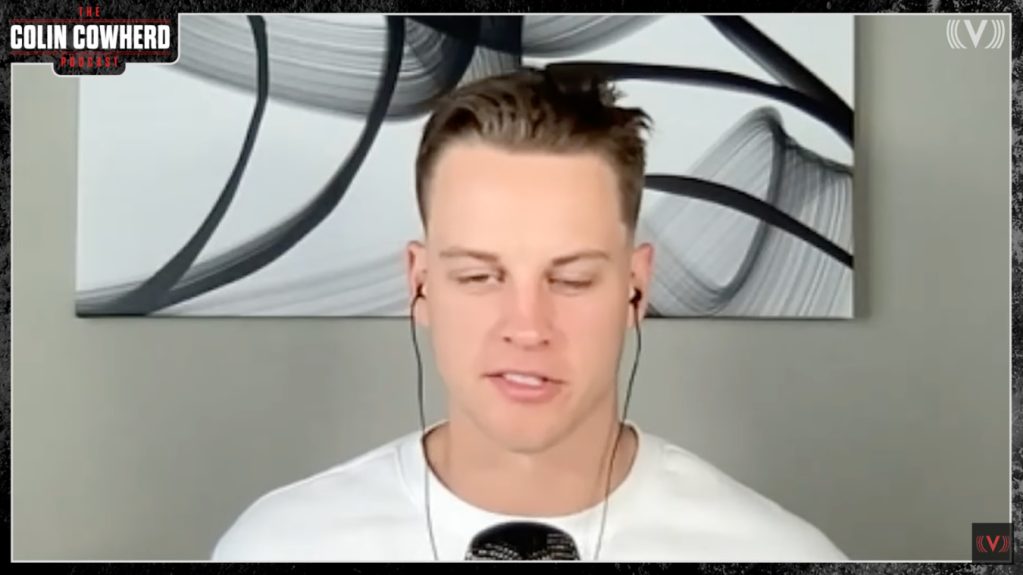 Rapper Kid Cudi and Bengals quarterback Joe Burrow are pretty good friends. You might even say they have a ‘bromance’. I did, I put it in the headline because they’re just a couple of Ohio guys being dudes.

Kid Cudi recently released his 8th studio album, Entergalactic, and it features a track titled ‘Burrow’ which pays homage to the Bengals quarterback who led his team to the Super Bowl last season. From the outside looking in, it’s eas to assume that tall celebrities know each other but their friendship is relatively recent.

Colin Cowherd sat down with Joe Burrow yesterday and discussed everything from Burrow’s pre-game outfits to the Bengals-Ravens rivalry. Then Cowherd asked Burrow how he wound up in a Kid Cudi song and who the two became good friends. Joe breaks it down here around the 19:30 mark.

Joe Burrow Explains How His Bromance With Kid Cudi Came About

Colin Cowherd: “As uncool as I may appear, I know who Kid Cudi is. And I don’t know you’re relationship but he has lyrics, a new song, and you’re in it. I imagine you’re fairly tight. So first, explain the relationship?”

Joe Burrow says: “Well, growing up he was the music that I listened to. 6th, 7th, and 8th, grade when you’re finally starting to figure out your own tastes and you’re not just listening to the same music that your parents were. You know? That’s what you do growing up, so I listened to Crosby, Stills, and Nash because my dad liked them and all that stuff.”

“Then you start to mature and I started to like Kid Cudi and that’s the music that I grew up on and found myself personally listening to all the time and then he reached out before I got drated to Cincinnati. And we’ve kind of kept this relationship going, we’re friends now.”

Ladies and Gentlemen.. Kid Cudi is back

Joe Burrow: “He told me he was going to make this song… We hung out together after the Super Bowl… He kind of cheered me up after that. So we have this relationship that has continued for a couple of years and it’s exciting for me. He’s been a good friend, he’s helped me a lot. I’m lucky to have a guy like that.”

You can watch the full video here:

And if you haven’t seen ‘Burrow by Kid Cudi’ you can check that out right here:

Kind of makes you wonder if Joe Burrow is pumping that song in his headphones before games.