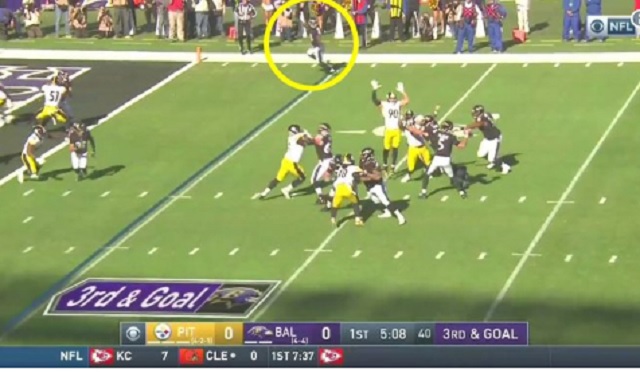 Before the start of the season there was some drama between Joe Flacco and rookie Lamar Jackson when Jackson said the veteran QB hadn’t called him after he got drafted.

<
Meeting with reporters during rookie minicamp on Saturday, Jackson was asked whether he has heard from Flacco. The answer?

It sounds like he also hasn’t heard from recently-signed veteran backup Robert Griffin III, based on his answer to the next question of whether Jackson would ask Flacco or Griffin.

“I don’t know yet,” Jackson said. “How they see things on the field. What made them learn the system even faster, stuff like that.”

Months later, the Internet had jokes about the Flacco-Jackson relationship when Flacco didn’t see a wide open Jackson who was used as a decoy at wide receiver and would have scored an easy TD on a third and goal play.

Not sure if Joe Flacco missed the wide open Lamar Jackson or if he's just being pettypic.twitter.com/p75fGjBp02

Flacco had Lamar Jackson WIIIIIIDE open on the sideline. Flacco threw the ball high over the middle and misses the easiest 7 points he'll get.

Lamar Jackson was WIDE OPEN on 3rd and Goal, but Joe Flacco didn't see him pic.twitter.com/sR90IE8h5f

What if Joe Flacco was just teaching Lamar Jackson how to be an elite QB by not playing WR?

No one covered Lamar Jackson. No one. At all. Even when he went in motion. Flacco threw…elsewhere.

He did. Just didn’t want to throw to him