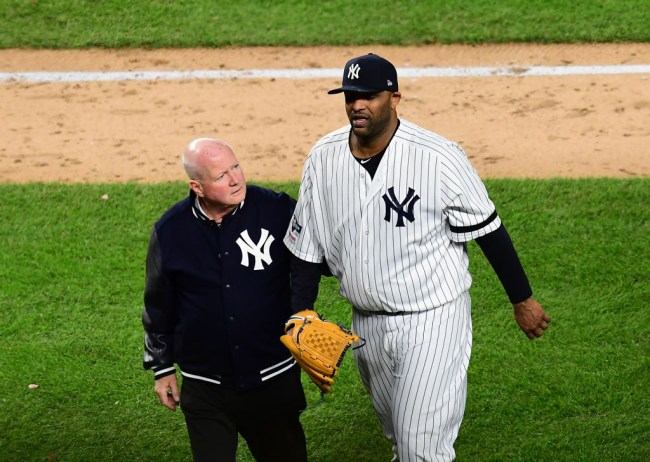 CC Sabathia threw his final pitch in the Major League after pitching 0.2 innings in relief during the Yankees’ Game 4 loss in the ALCS on Thursday. The 39-year-old won’t pitch for New York again this postseason as he was removed from the roster to make room for Ben Heller.

Sabathia announced back in February that he would be retiring at the end of the season.

He came into the contest on Thursday night in the eighth inning and while in a bases-loaded jam, his knee buckled and his shoulder seemed out of whack, later described as a partial dislocation, before leaving the mound.

It was a tough scene to see the six-time All-Star trot off the field.

It was an extremely tough thing to watch for Joe Girardi, who managed Sabathia for nine years, as he broke down on MLB Network while paying tribute to Sabathia.

“You probably were the greatest teammate I have ever been around because of your ability to pull all 25 and sometimes all 50 people together in a clubhouse.”

If you’re a Yankees fan, that video certainly hits you in the feels.

New York ended up losing Game 4, 8-3 and now find themselves in a do-or-die situation as they trail in the series 3-1. Game 5 is set for Friday night with the first pitch in the Bronx coming at 7:08 PM EST.