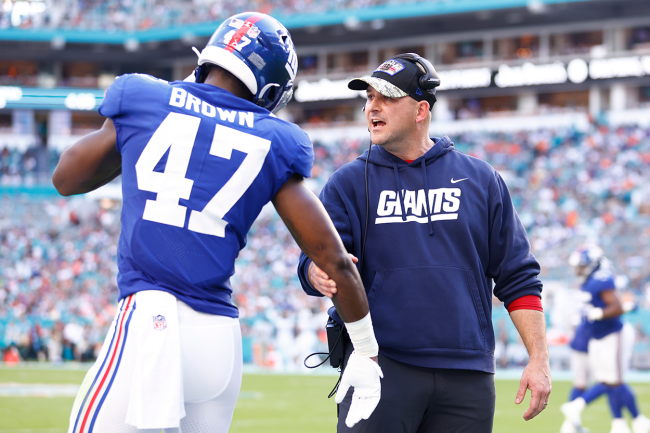 Joe Judge’s time as the head coach in New York lasted two years and it did not prove fruitful. The former Giants coach did not help the organization take a positive step forward toward success and his legacy is reportedly causing problems even after he is gone.

During Judge’s time as head coach, he was known for his no-nonsense style. When players got involved in training camp scuffles or messed up in practice, he would have them run sprints and do push-ups. Judge even made his assistant coaches run with the players at one point.

While that might not seem particularly outlandish, it is not particularly common in the NFL. Judge’s tactics were very high school coach-esque and his “punishments,” for lack of better word, caused a ripple effect.

USA Today beat writer Dan Benton had boots on the ground at Giants minicamp last week. He wrote about his big takeaways from what he saw, and one of his observations was the scars that Judge left on the team. Particularly, Benton noticed that players seemed scared to mess up during practice.

“Perhaps the most notable takeaway from minicamp is how much the atmosphere has changed under Brian Daboll,” he wrote. “Unlike with Joe Judge before him, players felt more free to make mistakes and not incur an immediate wrath. . . after a brief transition period.”

“You can just kind of tell people get a little scared when they mess up,” Jon Feliciano said, noting that players from the Judge era still expect strict discipline. “No one likes messing up. But, like, it’s OK. [Brian Daboll] wants you to take chances. If something happens, it’s all right. It’s not all right, but this is the time for it to happen.”

Yikes. The Giants’ Judge era left deeper wounds than it even appeared on the surface.