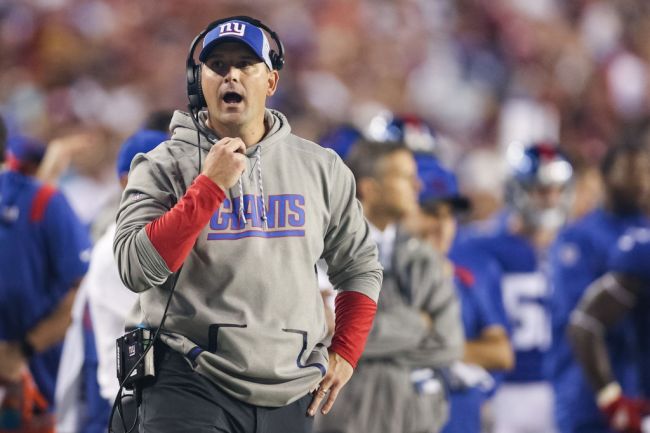 Joe Judge wants to be very clear that he isn’t scared of anything. He doesn’t live in a world of fear and he really really wants you to know.

After beginning 0-3, the New York Giants are not in a great position to make the playoffs this season. Not necessarily because their record won’t allow them, but because they just don’t look very good.

Because of the abysmal start to 2021, people are beginning to question Judge and his decision making. In particular, many fans questioned whether the Giants should have gone for it one 4th down late in the game on Sunday.

Instead of trying to convert a 4th-and-9 at the 50-yard-line with less than two minutes remaining in a tie game, Judge chose to punt. The Falcons drove to score the game-winning field goal on the next drive.

Judge was asked Wednesday about how analytics factor into his decision on whether to attempt a fourth down conversion and he simply was not interested.

In response, the 39-year-old went on a completely unprompted rant about how he doesn’t live in fear. He isn’t scared and he wants to make that very well known!

"I'm not afraid to go for it on fourth down. I don't live in a world of fear."

During the strange rant, Judge brought up Microsoft Excel and Bill Gates.

“Analytics is just a tool,” he said. “You can look at a stat sheet all you want. I promise you, if Excel was gonna win football games, Bill Gates would be killing it right now. But you’ve got to take those numbers.”

And while Judge isn’t wrong that analytics is “just a tool,” it is one that nearly NFL organization uses when it comes to decision making. In fact, the most successful teams often use analytics more than the rest of the league.

Per a survey conducted by ESPN’s Seth Walder in 2020, six of the 12 playoff teams from the 2019 season were amongst the 10 most analytically advanced organizations. In fact, the Baltimore Ravens are widely considered the most analytically-inclined organization and have made the playoffs in each of the past three seasons.

Judge’s ramblings about being willing to go for it on fourth down is true, but it isn’t overwhelmingly so. The Giants ranked 13th in fourth-down attempts last season, which is very middle-of-the-road.

In addition, Judge has twice chose to punt instead of kicking long field goals. New York lost both of those games.