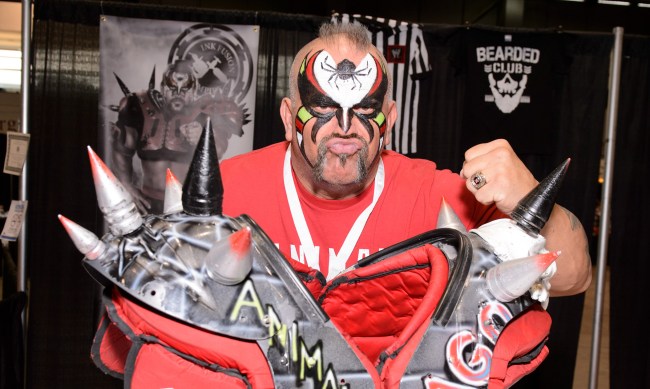 Sad new this morning for anyone who has ever been a fan of professional wrestling as Joe Laurinaitis, best known as Animal – one half of the legendary Road Warriors tag team, has died at the age of 60.

TMZ reports Laurinaitis died of of natural causes while staying at the Tan-Tar-A Resort in Osage Beach, Missouri.

We’re told cops received a call at around 11:49 PM from Laurinaitis’ wife … but when deputies arrived on scene — emergency personnel had already declared the ex-wrestler deceased.

Laurinaitis had recently appeared on the latest episode of Sportskeeda’s Legion of Raw podcast to discuss WWE’s Retribution faction.

WWE.com expressed its condolences on the loss of a legend…

One of the most intense Superstars to ever step into the squared circle, the 6-foot-2, 300-pound Animal spent the majority of his career alongside his tag team partner, Hawk. Together, they formed what was arguably the most successful, popular and feared tandem of all time — The Road Warriors.

With their intimidating face paint, outfits covered in metal spikes and impressive array of power moves, the duo captured titles and destroyed opponents wherever they roamed. Their dominance made them so popular that the phrase “Road Warrior pop” has been used in locker rooms to describe particularly deafening reactions from the crowd ever since.

Laurinaitis’ son James was a three-time consensus All-American linebacker at Ohio State and a second-round pick of the St. Louis Rams in the 2009 NFL Draft. His brother John Laurinaitis is also a former professional wrestler, and is currently employed by the WWE. Laurinaitis’ tag team partner in the Road Warriors, Michael Hegstrand, AKA Hawk, passed away on October 19, 2003 at the age of 46.

Watch highlights of Laurinaitis, Hegstrand and Paul Ellering’s careers as they were inducted into the WWE Hall of Fame below…

Love wrestling? Check out our podcast “Not About Wrestling” where we talk to the biggest stars in the sport today about everything except wrestling. (OK, and some wrestling.)