Joe Montana Is Baffled By The Patriots Letting Tom Brady Go: ‘Somebody Made A Mistake’ 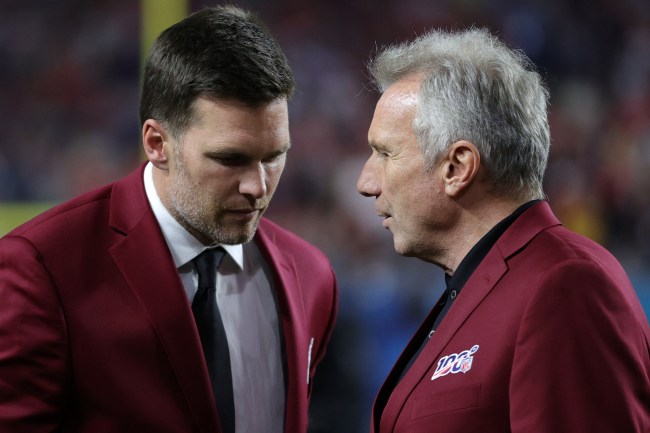 If you told me on February 3, 2019—as Tom Brady hoisted his sixth Lombardi Trophy—that he would be finishing his career in…Tampa Bay, I’d refer you to a medical professional.

But this is our new reality and Brady’s childhood hero, Joe Montana, cannot believe it either.

Montana, who requested a trade to Kansas City in his second-to-last season after winning four Super Bowls in San Francisco, is no stranger to head-scratching decisions in his twilight years, but this one even he can’t wrap his head around.

“I don’t know what’s going on inside there, but somebody made a mistake.”

“I think when you look at the whole situation, you try to figure out how you want to get away from things that are there,” Montana continued. “I had a different story, where they had made a decision. He, obviously, they never would have gotten rid of. I still don’t understand how New England let him get away. I don’t understand that.”

The Hall of Famer speculated why Brady would want to detach himself from arguably the greatest coach the game has ever known.

“It’s not about appreciation,” Montana said. “He wants control. I mean, he wants a lot of control. I don’t know what Tampa Bay gave him, but at some point in time, you’re just a player. You can try to get what you can and do what you want, but in the end, you’re still not in the hierarchy when it comes to hiring people, firing people and all that.

“I don’t know exactly what he’s looking for, but my understanding was that he’s just looking for more control of the offense. But I don’t know. I haven’t had a long conversation with him; I talked to him a little bit at the Super Bowl, but not enough time to really get in-depth.”

It remains to be seen if, like Montana, Brady can lead his new team to the AFC Championship.