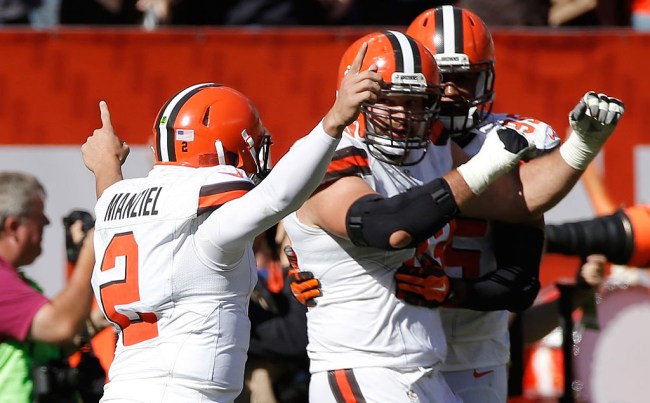 Future NFL Hall of Fame offensive tackle Joe Thomas had the misfortune of having to block for 21 different QBs during his 11 season career for the Cleveland Browns. And considering that he did not miss a single play in his career until his final season in 2017 (10,363 consecutive snaps), the man has a deep knowledge of this group (mostly terrible) quarterbacks.

Heck, it got so ridiculous in Cleveland that Thomas once had to introduce himself to one of the Browns quarterbacks in the huddle during a game.

Now that he’s officially retired (and has lost a ton of weight) the folks over at The Checkdown asked Thomas to say the first thing that comes to mind for each one of the QBs he had to block for all those years.

BrownsWire suggests not watching the video, but instead just listen and don’t read the names and try to guess which of the over QBs he’s discussing.

We asked him the first thing that comes to mind for each one. 😂 @joethomas73 pic.twitter.com/f9IZymkR61

Got to love his honesty. Too funny. And at least one of those quarterbacks, Connor Shaw (does anyone even remember him?) wasn’t too upset with Thomas’ take.

Welp, there are worse impressions I guess? 🤷🏼‍♂️ smh https://t.co/eBuVHzxbw4

FYI, Shaw played college ball for South Carolina and played in one game in the NFL, going 14-28 for 177 yards and a pick for the Browns in 2014. He is now the tight ends coach at Furman University.

Thomas also shared his take this week on who will be the breakout star for the Browns on this year’s edition of Hard Knocks. Any guesses for who he picked?