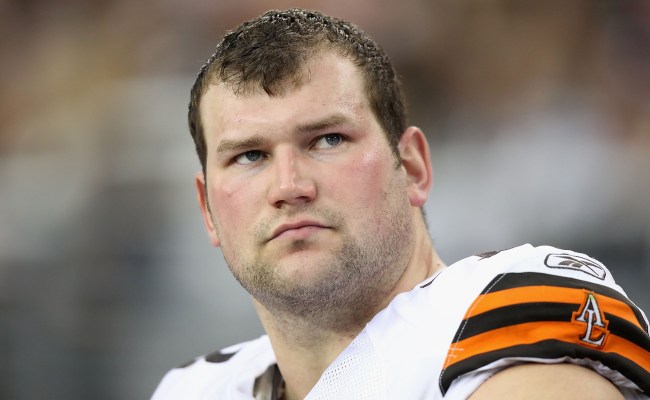 To the surprise of virtually no one, The Golden State Warriors trounced the Cavaliers in this year’s NBA Finals and dashed the hopes and dreams of fans who were counting on LeBron James to bring one more championship to Cleveland before his inevitable defection to another city. However, there was one Cavs fan who was particularly devastated about the results: former Browns tackle Joe Thomas, who pledged to give away signed, game-worn Steph Curry jersey to anyone who retweeted his ill-advised promise.

I’m so confident in my @cavs, if the @warriors win the 2018 NBA finals, I’ll buy anyone who retweets this a signed @StephenCurry30 gameworn jersey. Even you @RandallTime. @KingJames https://t.co/zsQp3LxGbu

The message was retweeted over 275,000 times after it was first posted which put Thomas in a bit of a bind. However, it appears he came up with a pretty hilarious and innovative solution to making good on his pledge.

According to For The Win, a number of fans have received a package containing a shirt emblazoned with Thomas’ signature with the message “I was promised a game worn signed LeBron James jersey, and all I got was this crappy shirt from Joe Thomas” (I guess he forgot what he actually promised in the first place, but whatever— a free shirt is a free shirt).

A number of fans have shared pictures of the shirt on social media— including at least one who’s trying to make some money off of the gift.

@joethomas73 , thanks for the awesome shirt. You are the goat! #crappyjoethomasshirtgiveaway pic.twitter.com/vrHOKJzj44

Gotta say, @joethomas73. Didn't know what to expect with that giveaway, but loving the shirt. pic.twitter.com/WbY7vF3gAb

Got an XL one selling it to whoever just let me know lol pic.twitter.com/eZXIC6XzkD

@joethomas73 Thanks, Joe! This is better than an autographed game worn jersey from that former Cav! pic.twitter.com/sbQCXdGoEb

Thomas jokingly claimed he would follow through on the offer last month and had fans submit their address after liking and subscribing to his podcast and I have to give him credit for (sort of) following through.

Lastly, I’ll need shipping information for all of these items. I’ve been advised that the best way to do that is to send all the retweeters to my podcast, #ThomaHawk show where they need to 5 star rate and subscribe to the show https://t.co/ZhqNQ5vPHO

It’s unclear how many shirts he made or if you’re still able to take him up on the offer but if Michael Scott taught me anything it’s that you miss 100% of the shots you don’t take.