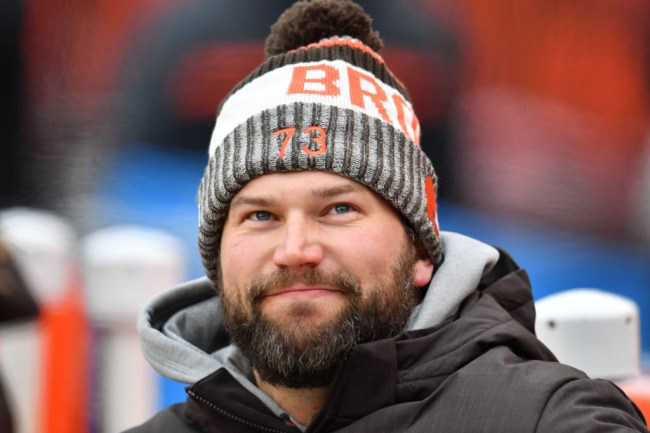 This year, the writers in charge of scripting the NBA season decided to mix things up a bit by introducing a number of major trades and devastating injuries that made it seem like a bunch of teams could have a legitimate shot at the title before deciding it would be best to treat the world to yet another championship matchup between the Cleveland Cavaliers and the Golden State Warriors.

The NBA Finals will tipoff tomorrow night, and while LeBron and The Other Cavaliers aren’t exactly being viewed favorably by the guys behind the curtain in Vegas, the odds haven’t done much to put a dent in the confidence of many their fans— including former Cleveland Brown Joe Thomas.

A couple of days ago, current Brown Damarious Randall sent out a tweet expressing just how much confidence he has in the Cavs to take home Larry O’Brien’s trophy, claiming that anyone who retweeted his message promising a free jersey in the event of a Cleveland championship win would get some free gear if LeBron’s knees can last one more series without collapsing from under all of the weight on his back.

On Tuesday morning, Thomas decided to take things to the next level with an even more impressive (and drastically more unrealistic) offer of his own.

I’m so confident in my @cavs, if the @warriors win the 2018 NBA finals, I’ll buy anyone who retweets this a signed @StephenCurry30 gameworn jersey. Even you @RandallTime. @KingJames https://t.co/zsQp3LxGbu

Thomas’ promise has already racked up tens of thousands of retweets, and even though I might not be a sports memorabilia expert, something tells me that might be one or two more than the number of autographed, game-worn Steph Curry jerseys in existence (I’m sure Darren Rovell will do his thing and let the world know the actual number— and their value— at some point today).

I don’t have a horse in the NBA Finals race, but now I’m fully on the Cavaliers bandwagon just so I can see if Thomas has a Christ-like ability to turn seven authentic signed Curry jerseys into enough to feed the people of Twitter.