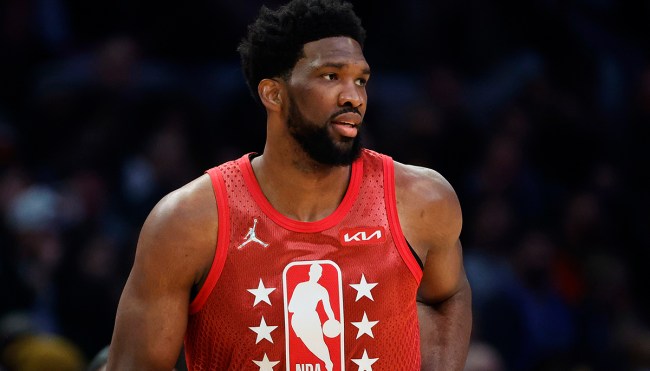 Earlier this month, the Ben Simmons Era officially came to an end in Philadelphia after the 76ers sent the man who missed out on around $20 million by refusing to play for the team this season to the Nets in exchange for James Harden.

The blockbuster trade generated plenty of reactions online—including a tweet that was posted by Joel Embiid in its wake that made it very clear how Simmons’ former teammate felt about the development.

If you’re not proficient in meme history, the image was a reference to an Instagram post from 2013 where the man in the picture claimed he’d “Stopped By One Of My Biggest Haters Funeral Today” to make sure he was dead (accompanied by #RIPBOZO).

So, yeah, it’s safe to say Emiid was not too sad to see Simmons go.

The 76ers big man went into Full Troll Mode when he was asked about what motivated him to post the picture at a press conference, as he declined to acknowledge its true origins while insisting he was simply a fan of the “well-dressed” man and his “nice suit.”

"I just saw the picture on the internet. I thought he was well-dressed, he had a nice suit on… I thought it was a good picture."

Embiid continued his campaign against Simmons during the All-Star festivities in Cleveland over the weekend, as the man in the picture—who goes by “Big Fendi” on Instagram—revealed he got the chance to step onto the court at the main event and pose for a picture with the Philadelphia center.

A post shared by Big Fendi 🐐 business Only (@bigfenditv)