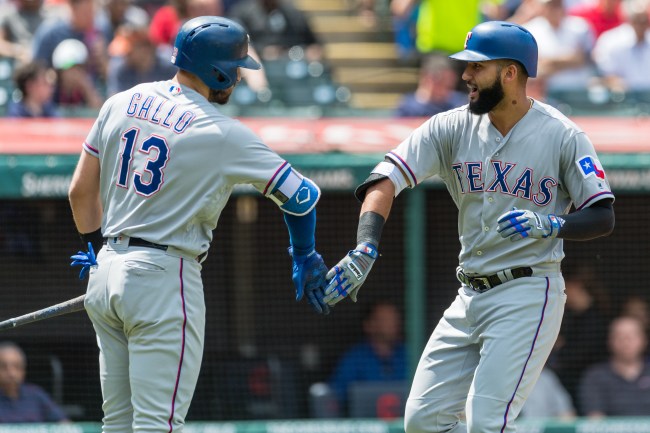 I don’t know about you guys, but whenever I achieve a professional milestone that puts my company in a more advantageous position, I celebrate by grabbing Steve’s dick in the conference room. Ok, that sounded weird, so to clarify, Steve also grabs my dick. It’s a mutually beneficial dick-grabbing experience and really boosts morale in the office.

Apparently, Steve and I aren’t the only ones who grab each other’s frank and beans in a work setting. Texas Rangers players Joey Gallo and Nomar Mazara also engage in this fun, totally-not-weird activity.

After Gallo blasted a two-run shot to right-center during the second inning of the Rangers matchup against the Los Angeles Angels, Mazara was waiting for him at home plate to grab some crotch.

Had to rewind it to believe it: pic.twitter.com/HDIFvdwiab

The Rangers would not score a single run after the package pump and would go on to lose to the Angels, 7-2. Maybe Gallo and Mazara should reconsider their celebrations going forward. Twitter certainly seems to think so…

What in the boys club was that?! pic.twitter.com/qwxUnZ3jIM

Hey, as long as they’re happy.