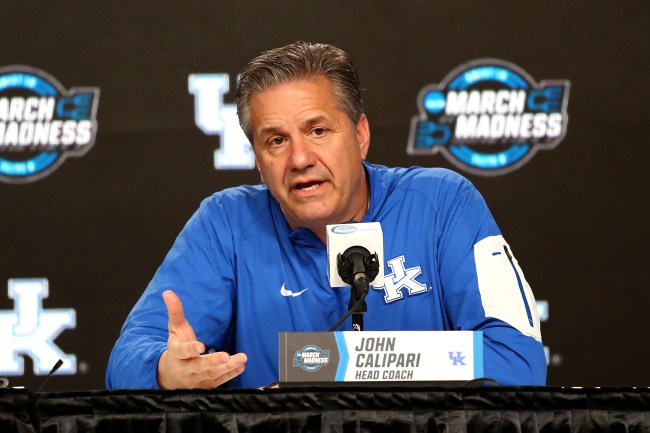 John Calipari took over the Kentucky Wildcats’ men’s hoops team all the way back in 2009. Since then, all Cal’s done has won one national championship, gone to four Final Fours, routinely brings in the top recruits in the nation and, oh yeah, joined the Basketball Hall of Fame for all his coaching accomplishments. So to say that the school wants to keep Calipari around for a little bit longer is an understatement — and that’s exactly what UK’s trying to do.

According to Seth Davis of The Athletic, John Calipari reportedly got offered the equivalent of a lifetime contract to stay in Lexington, hoping that the deal would fend off any rumors of the head coach going elsewhere, and would include a 10-year extension that would have him serve as a “paid ambassador” after his retirement. The news comes on the heels of a reported contract offer from UCLA to pry away Cal from UK for six years and $48 million.

Considering John Calipari’s at one of the blueblood programs in all of college basketball, and just reached yet another Elite Eight in this year’s NCAA Tournament, one would think that he sticks around. However, UCLA has its own rich history and is ripe for a turnaround, and there might not be a better candidate given his star-power and polarizing charisma than Calipari.

Although the reported interest from places like UCLA and, potentially, the NBA are intriguing, John Calipari has mentioned his plan is to stay at, and retire, at Kentucky. Here’s what he tweeted before this year’s March Madness.

Before I go to bed, let me just say this: I’m coaching at the Univ. of Kentucky. In my opinion, there is no better job in the world to coach basketball. My plan and my desire is to retire at Kentucky. I think the university feels the same as I do and we’ve talked openly about it.

Although the reported lifetime contract extension doesn’t include financial terms, considering John Calipari is currently the highest-paid coach in college basketball right now at $9.2 million per year, according to USA Today, one would assume the deal increase the annual average plus adds more earning potential through incentives or outside responsibilities. Calipari previously signed a contract extension in 2017 that runs through 2024, so we’ll have to see if he honors that, while signing a new extension, or seriously considers leaving the Bluegrass.