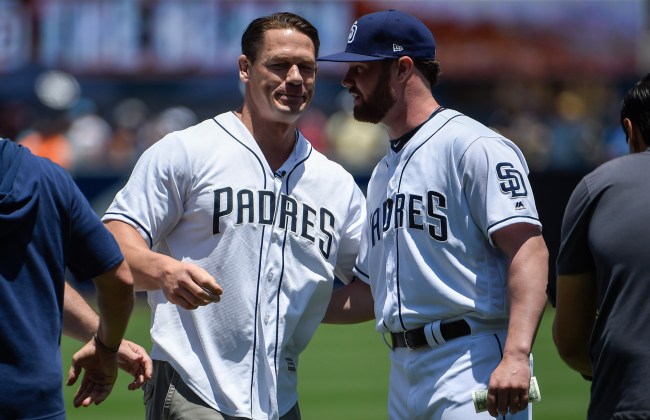 Amazingly, as it turns out, sometimes fairy tales actually come true, because that’s exactly what happened Tuesday night when Allen allowed no runs and gave up just five hits in seven innings to get the W versus the Brewers in his first Major League start.

As for how John Cena somehow came to be involved in Allen’s big day, that’s a whole other story.

About 17 months ago, Allen and Ryne Stanek, a pitcher for the Tampa Bay Rays, were at a Tampa Bay steakhouse at the same time Cena and some of his buddies, including a former Minor League pitcher, noticed them at a nearby meeting with some agents.

When Cena’s baseball-playing friend Colin Young noticed what was going, and was worried that the agents were taking advantage of the players (they weren’t as it turned out), he alerted Cena. That’s when the actor and 16-time WWE world champion decided he was going to get involved.

After inviting the players to sit with them, Cena got to know Allen, liked what he heard, and wanted to see if he could inspire him so they made a bet… for one dollar.

Sometime deep into the night, he made his wager. “I’m going to bet against you,” he told Allen. He cited the percentages, which, objectively, are formidable for the overwhelming majority of minor-leaguers. He referenced his own career and the numerous times he had been discounted. Before he rocketed to fame, he cleaned toilets and lived out of a car.
…
“Essentially, the wager’s amount was so small it was irrelevant,” Cena says. “I just kind of wanted to give Logan the perspective of, there is always a force in the universe that is going to say, ‘You have a large hill to climb in front of you, and I don’t believe you can do it.’ And sometimes that little small piece of energy is enough to get you over that hill.”

“If it can be a nice fuel in the back of the fire of Logan’s head to be like, ‘You know what? Eff that John Cena. I’m going to make him pay me that buck and I’m going to stuff it down his effing throat’ — that, to me, is just great,” Cena says. “He is the type of guy who, at the end of the night, when you’re shaking hands, you walk away and say, ‘Man, I really hope that kid makes it.’ Because he’s a bright, wonderful young man with a great head on his shoulders who has a genuine gift, realizes he has a gift, and you want to see nothing but good things happen for somebody like that.”

After being named the Texas League Pitcher of the Year for 2018, Cena had a (good) feeling this was one bet he was going to lose.

Well done @SD_Southpaw ! 💵 #OneDollarBet this is a bet I really hope to lose! #NeverGiveUp pic.twitter.com/gzE6ejHxRk

Then, this week, when Allen found out he was getting promoted to the big club, he texted Cena, “You owe me a dollar.”

Unbelievable night. One I truly will not forget. Thank you to everyone that reached out. @JohnCena you owe me a 💵. Let’s Go Padres!

Cena did him one better, showing up in person at the stadium to present his one-dollar bill to the Padres hurler.

Check out the entire incredible story over at The Athletic.com.