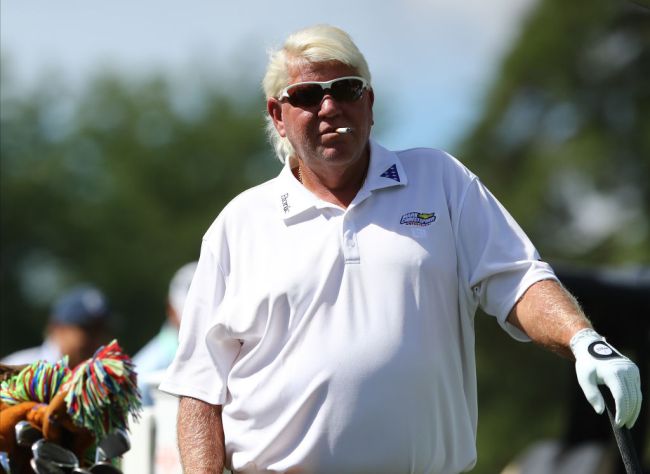 Two months ago John Daly revealed that he had unfortunately been diagnosed with bladder cancer. The diagnosis hasn’t seemed to slow him down too much though. He attended the final Presidential Debate in Nashville, was caught making a hole-in-one while barefoot at a charity event recently, and this week he’s teeing it up in the TimberTech Championship in Boca Raton, FL.

Ahead of this week’s PGA Tour Champions event, Daly caught up with the media and gave a bit of an update about his diagnosis and the positive in the matter being that it is treatable.

“The only positive is this cancer is treatable, but I’m probably looking at chemo for the next five to seven years,” Daly said according to Golfweek. “The first chemo kicked my butt. I’m just praying maybe they got it.”

Part of what makes Daly such a legend is that more often than not he’s either got a cigarette in his mouth and either a Diet Coke or alcoholic beverage in one hand. After receiving the tough news, doctors told him that he needs to cut back on things like that and that it’s actually the things he loves that is causing the cancer.

“Everything I love to eat and drink causes the stones that causes the cancer,” Daly said. “Alcohol. Beef. Milk. Diet drinks. I’ve tried to cut back on the smokes. Thank God I don’t like energy drinks because they’re the worst.”

Daly did make one thing very clear when he announced that he had been diagnosed with cancer and that was that he’s still going to live his life.

“If it comes back, it comes back. Six months to a year, if it doesn’t go away, I’m going to live my life. I’m gonna have some fun,” Daly explained. “It would have been nice to play the last seven or eight or 13 years of my career a little more healthy. But hey, I’m still working, I’m still living life, I’m still doing the things I need to do. … I can accept the challenge. I’m not scared of that. I just want my kids to be OK and everyone else in my family.”

Daly won five times on the PGA Tour and won both the 1991 PGA Championship and the 1995 Open.