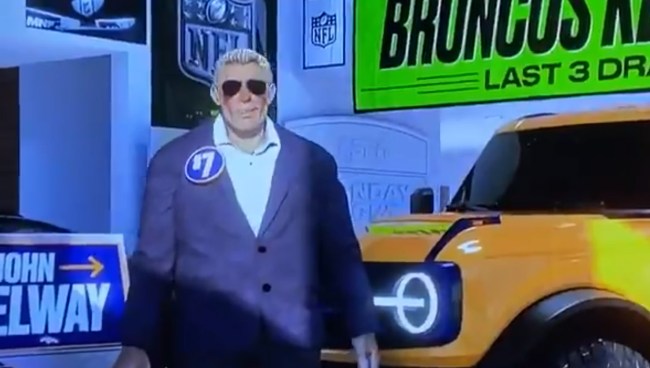 Okay… what the hell is that? I mean, I know that is supposed to somehow be legendary quarterback turned Denver Broncos president of football operations John Elway, but… huh?

Apparently there are people over at ESPN who (a) created this image thinking it actually looked like John Elway, and (b) approved this bizarre image as being suitable for airing during the Titans and Broncos’ Monday Night Football game.

The graphic was supposed to be something about how and what Elway has done in the NFL draft since taking over the general manager duties for the Broncos, but the content of the message was completely lost and overshadowed by the hilarious reactions to the frighteningly bad caricature of the Broncos Hall of Famer.

Have they ever seen John Elway? https://t.co/tvw9a0m1YS

I was watching this as it happened and I can tell you that I literally have no idea what the exact purpose of the graphic was or what was being said about it because I was too busy thinking I had stayed up too late, was getting tired and starting to see things. Turns out, I wasn’t. It was… real.

When did John Elway get that Mr. Incredible body? pic.twitter.com/OCeTB9xKQf

The Monday Night Football CGI John Elway looks like he’s about to help you on a Grand Theft Auto mission pic.twitter.com/WSXJbWdTe0

ESPN owned by Disney and this is the best animation they can afford?

In The Spy Who Loved Me and Moonraker, he sported metal teeth and was called Jaws.

Clay from Sons of Anarchy

Why did John Elway look like a low-rent '80s action movie goon in that graphic?

Ok but what attention to detail. that is 2020 @Ford Bronco

Just when it appears they have finally gotten the Monday Night Football announcers’ booth sorted out they go and do this. Stay weird, ESPN.