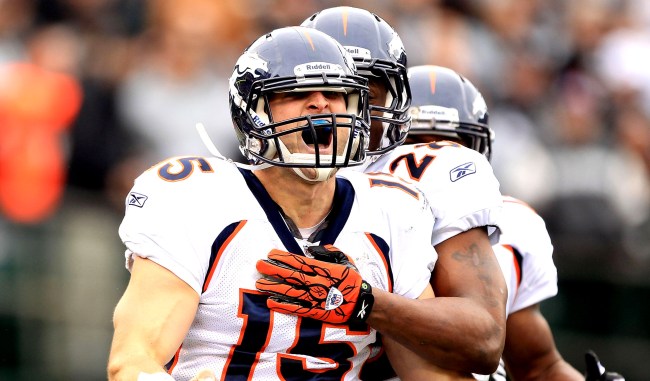 Tim Tebow’s time in Denver playing for the Broncos and the team’s president of football operations John Elway only lasted two seasons, but they were certainly memorable – not always for good things, however.

After replacing Kyle Orton as the team’s starter in season two, Tebow led the Broncos to a first round playoff win versus the Pittsburgh Steelers, throwing for 316 yards with an average of 31.6 yards per completion (divine intervention?).

Despite that success, the Broncos signed Peyton Manning and sent Tebow and his 47.3% completion percentage packing.

Now, a new book by Jason Cole, Elway: A Relentless Life, we get a peek behind the scenes of Tebow’s two years in Denver, and he doesn’t come off sounding like the greatest person or football player.

According to the book, Elway decided to take a chance on Manning, who sat out the entire 2011 season with a neck injury, because he was a “better gamble than Tebow would ever be” and would be a “way out of the Tebow mess.”

Selected in the first round by then Denver coach Josh McDaniels after he traded up for him, Tebow proceeded to struggle with the offense.

“As one teammate put it bluntly that season: ‘He has no idea what’s going on out there,” Cole write. “If the first read doesn’t work, he’s just making it up.'”

Broncos coaches, according to Cole, would “shake their head when asked about Tebow’s classroom understanding of professional concepts.”

On top of that, Tebow reportedly rankled Broncos players and management by charging a $50,000 fee for speaking gigs at churches and one time his brother even told Elway’s wife Janet that Tebow would attend her a charity event, if she paid him the $50K.

It was behavior like this that led one Broncos employee to tell Cole Tebow was the “most self-centered humble guy I’ve ever met.”

Tebow ended up playing just one more season in the NFL, with the New York Jets where he threw just 8 passes before being out of football.

He has since moved on to become a college football analyst for ESPN and undeservedly taking up a roster spot on the New York Mets Triple-A team.