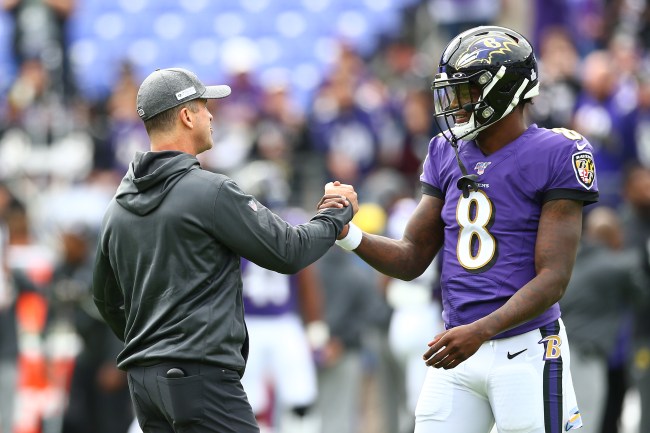 I’m glad you’re here. This will be a good use of your time, no matter what team you’re sworn to.

For those of you like me who salivate over a good mic’d up clip and would listen to Tom Brady fart through a walkie talkie as long as it was in the field of play (I mean, what?), we may have been gifted the greatest clip of the season courtesy of John Harbaugh and Lamar Jackson.

During the Ravens’ 49-13 win over the Bengals to secure their fifth straight victory and bring Lamar Jackson to the forefront of the MVP discussion, the Ravens coach sat with the 22-year-old to heap praise on his leadership abilities and style of play. Jackson then revealed himself to have his mind on all the right things.

“You changed the game…You know how many little kids in this country are gonna be wearing No. 8 playing QB for the next 20 years?"

This Harbaugh/Lamar convo is so real ✊

Jackson finished Sunday’s game with a perfect passer rating for the second time this season and the highest any quarterback has posted this season.

He also did this:

Are you fucking kidding me dude? If I tried to do this at 1/10th of the speed, my knees would evaporate and I’d have to be airlifted to Mass General Hospital.

This may be up there with my second most favorite spin move of all-time, the first being when I spun Chelsea Cassatina during Stairway to Heaven at my eighth grade semi-formal.

Braxton Miller has been signed by the Browns.