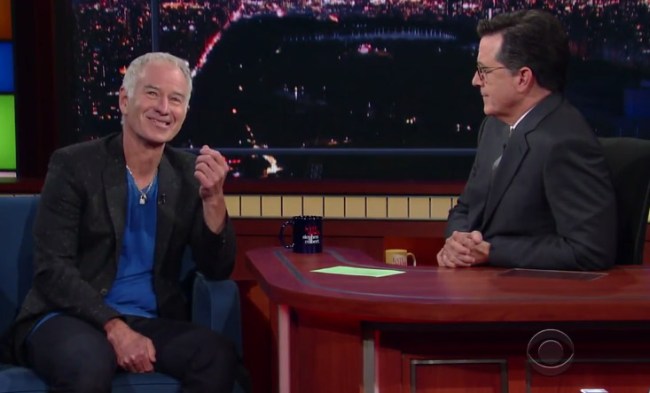 As you may have heard, tennis legend John McEnroe got into some hot water recently for saying that he believes Serena Williams would be ranked “like 700 in the world” if she played against men. Yeah… talk about poking a hornet’s nest. McEnroe, as any casual fan of tennis knows, is really good at doing that sort of thing and now that he’s on a book tour what better time to do it again, right?

“That doesn’t mean I don’t think Serena is an incredible player. On a given day, Serena could beat some players. I believe because she’s so incredibly strong mentally that she could overcome some situations where players would choke ’cause she’s been in it so many times, so many situations at Wimbledon, The U.S. Open, etc. But if she had to just play the circuit, the men’s circuit, that would be an entirely different story.”

On Tuesday McEnroe appeared on CBS This Morning where, of course, his comments about Williams were brought up once again.

When asked if he thought he should apologize, McEnroe said, “It’s not necessary. I didn’t know it would create controversy.”

“I respect Serena very much so and I was simply calling her on NPR, which supposedly this is where you can say it like it is and you’re gonna get honest feedback, she’s the greatest player, female player, that’s ever lived,” McEnroe clarified before offering a solution.

“Why don’t you combine, just solve the problem. I’m sure the men would be all for this, the men and women play together. And then we don’t have to guess.”

Dear John, I adore and respect you but please please keep me out of your statements that are not factually based.

I've never played anyone ranked "there" nor do I have time. Respect me and my privacy as I'm trying to have a baby. Good day sir

“Do they say that about girl basketball players? That they’re as good as Michael Jordan, for example?” McEnroe asked Colbert.

As far as the McEnroe and Williams ever playing, Mac has said in the past that he thinks he could still beat her.

However, that was two years ago, so on Tuesday he was singing a slightly different tune.

“My girls don’t think I can beat her now. I thought I could beat her,” he said. “She’s pregnant, so maybe I should play her now. I’d have a better chance. But, either way I wish her the absolute best. She’s the best thing that’s happened to American tennis in the last 10 to 15 years.”

Wait, didn’t Serena just win the Australian Open while she was pregnant? Sorry, John, like Serena, we adore you, but nope. No chance.