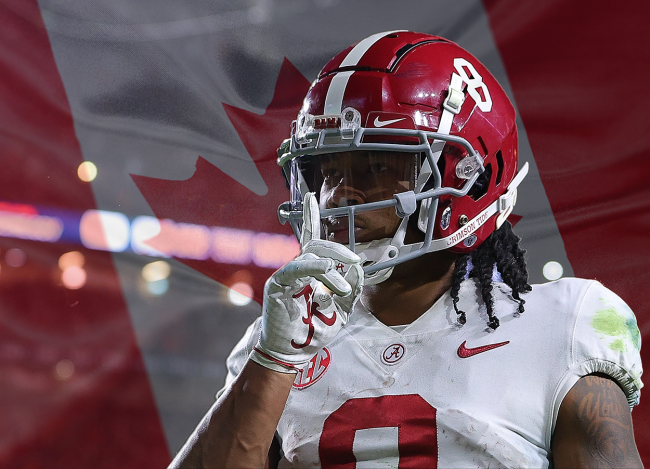 John Metchie III has a very easy decision to make about his future. The Alabama wide receiver has two opportunities to play professional football after being drafted into two separate leagues.

Obviously, the 21-year-old is going to play in the NFL. However, should everything go wrong and his career falls out from under him, Metchie has a backstop.

On Friday night, Metchie was drafted by the Houston Texans with the 44th overall pick in the second round of the NFL Draft. He has yet to sign his contract, but he will be joining the team for rookie camp in the coming weeks, barring unforeseen circumstances or a wild, unexpected decision.

Five days after hearing his name called in Las Vegas, Metchie was drafted again. This time, however, he was a seventh round pick.

After being born in Taiwan, Metchie moved with his family to Canada at a very young age. He was less than two when his family moved to Brampton, Ontario.

Growing up in the Great White North, Metchie had a decision to make by the time he got to high school. Would he stay in Canada or move to the United States?

Ultimately, Metchie ended up moving to the U.S., became a top football prospect, committed to Alabama, won a national championship and got drafted into the NFL. It all worked out for him as well as it could have.

After two consecutive 1,000(ish)-yard seasons in 2020 and 2021, Metchie became the back-to-back Jon Cornish Award winner, given to the best Canadian athlete in college football. In the process, he became the #1 Canadian prospect ahead of the 2022 Canadian Football League draft.

Despite the fact that he is headed to the NFL, Metchie was drafted with the 59th overall pick in the CFL Draft on Tuesday. Should he decide to play in his home country, he will be a member of the B.C. Lions.

Again, there isn’t much of a decision here. Metchie is going to play in Houston.

However, by drafting the Alabama star, B.C. made a long-term investment. Should Metchie somehow fail out of the NFL, as many before him have (ie: Paxton Lynch), and try to resurrect his career in Canada, he would have to play for the Lions.

Apparently B.C. thought it was worth a flier.