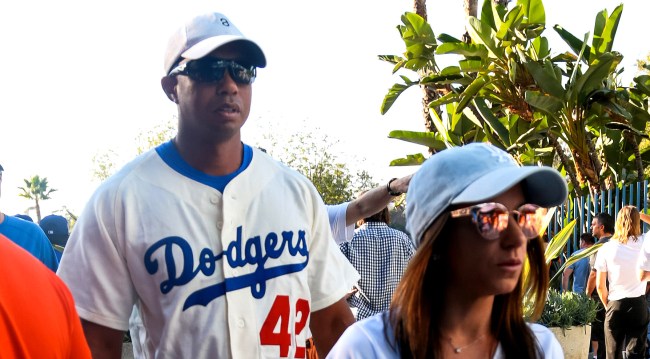 Hall of Fame pitcher John Smoltz is arguably the best golfer today of players who played other sports (hey, that’s what Tiger Woods said – even if today’s players have no idea who he is).

He qualified for the 2018 U.S. Senior Open (where he admits he was “overmatched”) and has won the celebrity division at the past two LPGA Diamond Resorts Tournament of Champions event.

Smoltz also happens to be good friends with the aforementioned Tiger Woods and they often play golf together, but one day, back when Smoltz was still pitching for the Atlanta Braves, it was Tiger who wanted to switch sports. At least for a little bit.

During his appearance on Golf Today with Shane Bacon and Damon Hack on Wednesday, Smoltz recounted the story of the time he threw batting practice to the greatest golfer of our generation.

“So he wanted to do this for years and I was like, ‘I don’t know if we can pull this off.’ And I just happened to have a rehab situation where everybody was gone from the park,” recalled the Cy Young winner Smoltz. “I said, ‘Alright Tiger, you can come and take four swings, pretend like it’s in a game, I’m going to be throwing like it’s a game. And he took the batting practice.

“I was concerned back then about, not me hitting Tiger, I wasn’t going to hit him, it was just jamming his thumb or catching one, you know? With golfers, I was like, ‘Are you sure you want to do this?’ and obviously he’s so competitive, we play ping-pong, it doesn’t matter what the sport, he wants to compete, and it was a competitive swing. You know, when you think about trying to face a 95 mile an hour fastball or a 90 mile an hour slider.

“I think he got a little frustrated at the end when I was trying to lay it in there a couple times in his fourth at bat, but he declared himself 1-4 with a walk. Brian McCann was a young catcher, was afraid to call strikes, which I got mad at, but all in all it was a good time, it was fun, it was something we’ll always be able to talk about for the rest of our lives.”