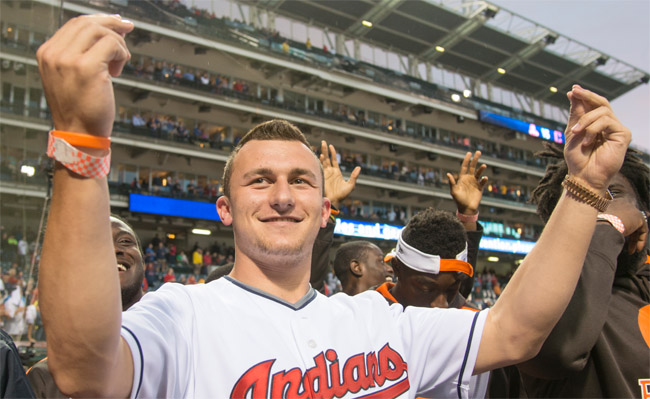 Serial partier Johnny Manziel is out of work no more! JFF has finally landed himself a paying gig and oh, boy is it a good one.

The timing couldn’t be any better either because at last count he has to pay lawyers for potentially violating his restraining order, as well as, let’s see, one, two, three, four, five lawsuits against him (that we know about).

As a part of Super Bowl week, Manziel is going to go full Pete Rose and hang out in a Houston-area memorabilia store, Stadium Signatures, and hawk autographs and selfies…

The 2012 Heisman Trophy winner, who was cut by the Cleveland Browns last March, will sign autographs in two memorabilia shops at Texas malls during Super Bowl week.

The memorabilia stores, Stadium Signatures, will host Manziel in their mall location in Katy for an hour Feb. 2, and then again the next day in Woodland.

The price is $99 for any item signed, $99 to take a professional photo with Manziel and $50 for a selfie or any picture taken with a fan’s phone.

Manziel also will add inscriptions, including “Johnny Football,” for $29.

Oh fuck! For only 29 bucks more I get a “Johnny Football” with my autograph?! I wonder if it’s too late to get plane tickets to Houston.