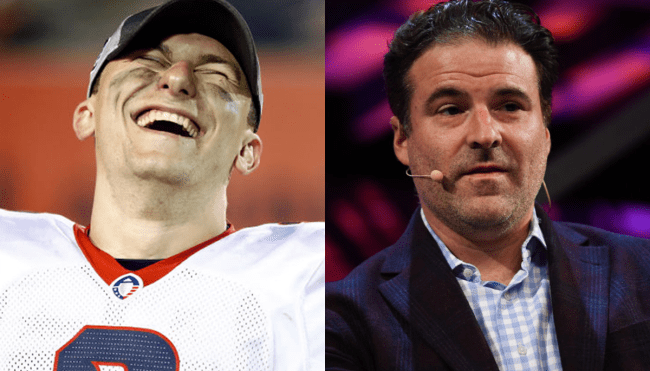 I can’t help but respect Darren Rovell for leveraging his crippling Twitter addiction into a burgeoning career, but I can’t exactly say the same for the strategy he’s harnessed on his way to growing a Personal Brand built on a foundation of insufferability and an almost unparalleled lack of self-awareness.

One of the most instrumental aspects of the success of Darren Rovell is the truly Tremendous Content he routinely posts to commemorate the anniversary of notable events in a wide variety of ways, like linking two totally unrelated things that occurred months apart thanks to the infamously incomprehensible thought process he relies on to operate.

I’m honestly in awe of this. Twitter has apparently broken Darren to a point where he’s now contextualizing current events with entirely random pop culture references instead of “On this exact second 17 years ago” tweets. I feel bad for his brain but this is tremendous content. pic.twitter.com/y4ihGGP5FD

There may be nothing Rovell loves more than calling attention to the death of a notable figure in the most tasteless manner imaginable, whether we’re talking about the time he managed to make Bill Buckner’s passing all about himself, marked the day Knute Rockne died in a plane crash by letting everyone know how much the rosary beads he was found clutching in the wreckage are worth, and honoring the legacy of JFK by posting a video of a chunk of his head getting blown off on the anniversary of his assassination.

Rovell also has a long and storied history of routinely firing unsolicited shots at Johnny Manziel by figuring out ways to remind the world about his troubled past and fall from grace. It’s a particularly odd obsession when you consider Manziel has repeatedly acknowledged he used to be a huge shithead and is more than happy to poke fun at himself over the career that imploded as a result of his self-destructive behavior.

Last year, Rovell pulled an admittedly funny move when he attempted to secure a card Manziel signed and emblazoned with the words “Fuck Rovell” that was being auctioned off on eBay. While he was unable to bring that piece of memorabilia into his, he recently added something even better courtesy of the QB, who apparently sent an autographed helmet his way with a message for his long-time nemesis.

Looks like Johnny Manziel has sent me a gift.

And yes, @leafceo has authenticated that this is real. pic.twitter.com/IDaSQEKzHW