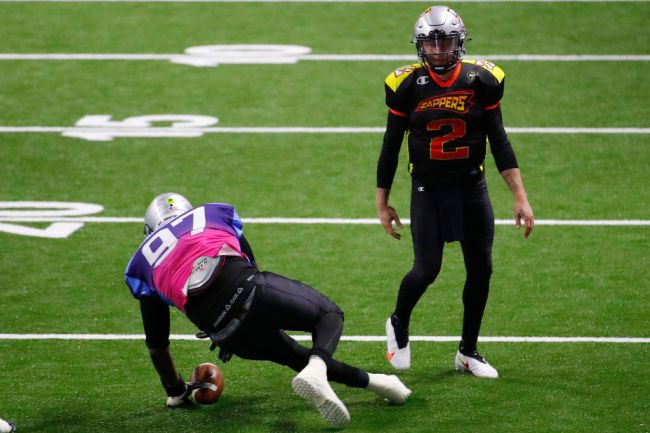 Johnny Football was in full form during his Fan Controlled Football League playoff game. The Zappers were looking like the 2015 Cleveland Browns when they took the field against the Wild Aces, with Johnny Manziel and Josh Gordon donning the black, red and yellow. FCF football is a seven-on-seven league that is played on a 50-yard field and it falls somewhere between glorified sevens, arena football and NFL Street. It has have a ton of experimental rules, like no kickoffs, punts or field goal, and the gameplay is catered to the offense. Fans at home call the plays on Twitch and there are very few penalties, a running clock and a few recognizable names for football fans, with the Heisman Trophy winner and Flash among them.

A few plays into the first drive, the center snapped the ball over Manziel’s head and caused a loose ball around the 25. He ran back to the high snap for a moment bud didn’t even an effort to try to get on the fumble, instead getting up out of there faster than hot knife through butter. Money Manziel made a business decision and walked away with giving a single care.

Johnny Manziel did not even try to cover up the loose ball. He was outta there 😂 pic.twitter.com/sn8eH03Dxj

His opponents recovered and went on to a 32-6 victory. Manziel and Gordon didn’t play often and the Aces went off.

The Aces are wild.

This is a blowout. pic.twitter.com/zrDsWmn4hU

Prior to the game, the former NFL duo were extremely confident in their team to get the job done. Manziel was downright cocky and then got smacked.

Their short season in the FCF is over and the two may or may not look for new opportunities to keep playing. Manziel said being bored was his reason for joining the league and Gordon wanted a chance to show what he can do if the NFL gives him another chance.

Other notable names include Robert Turbin, who scored in the first semifinal on Saturday.

Former Sunshine State quarterbacks Deondre Francois and Quinton Flowers also play. Francois had an great freshman season at Florida State before transferring to Howard after off-field issues and an injury, while Flowers played at South Florida amidst the tail end of the Charlie Strong era.

He’s dicing dudes up in the @fcflio pic.twitter.com/sGTQKLXB3S

He threw a dart to the corner for a touchdown in the @fcflio tonight 🎯
pic.twitter.com/ZTjyE0nxLC

Do you like the format? Let us know in the comments!