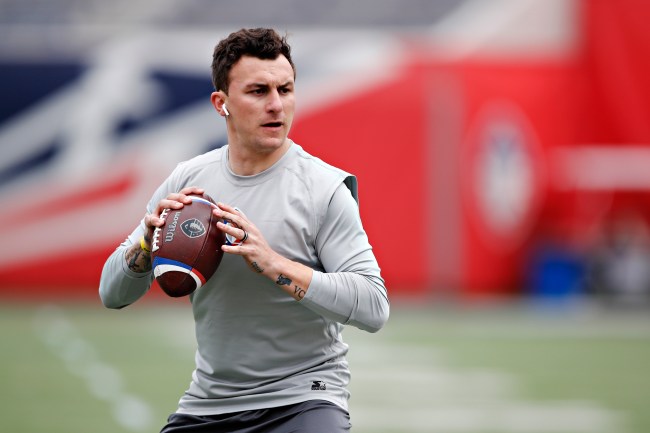 Johnny Manziel is somehow, some way still as polarizing as he was when he was flashing money signs with his hands after being drafted by the Cleveland Browns in 2014. While the embattled quarterback hasn’t done much of anything in the past few years except play (and struggle) in the CFL, have a short stint in the Alliance of American Football League (AAF), and go through a messy split from his wife, Bre Tiesi, because of alleged cheating, the dude remains a character in the sports world people care about. Good for him, because that’s not easy.

While there’s about no way in hell that Johnny Manziel gets another shot at the NFL anytime soon, there’s another league that’s almost made for his type of personality: the XFL. With Vince McMahon’s pro football experiment bound to make a comeback in the February of 2020, Johnny Football is someone who most people assume will find his way on a roster. Although the league just rounded out its head coaching roster for the announced teams, one head coach, June Jones of the Houston franchise, is already sounding as if he’s fully onboard with adding Johnny Manziel — assuming he enters the draft pool.

During his introductory press conference, Jones — who’s an offensive guru from his time in college football and the CFL — was asked about rumors that Manziel could join the XFL. Without much hesitation, the head coach gushed about the possibility.

“I had Johnny in Hamilton,” he said, referring to Manziel’s 2018 stint with the CFL’s Tiger-Cats where Jones was the head coach. “I enjoyed the five or six weeks (with him) … He played very good for me, actually. Johnny is an interesting guy. He’s competitive. He’s proven that he has won. He’s just been through a lot in the last three or four years. That’s kind of a league decision there, but definitely I assume that he’ll be in the draft pool. I assume that.”

The reason why Johnny Manziel may not be eligible for the XFL? Well, according to McMahon in an announcement in January 2018, players with criminal records wouldn’t be allowed to play in the league. But, c’mon, if Manziel draws a crowd, which he does, there’s no way in hell he’ll be kept from the XFL.

Who knows how all this will play out, but given the fact there aren’t many pro football leagues left for Johnny Manziel to play in right now, it seems as if this might be his only option, right? Here’s to hoping it happens, because the sports world apparently needs the Johnny Football drama.