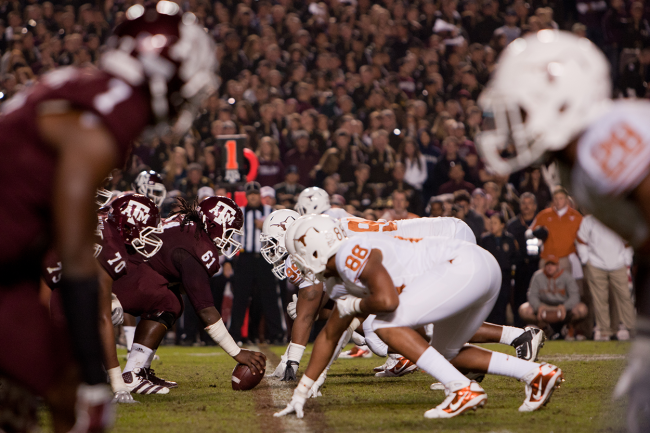 Johntay Cook has not been quiet throughout his recruitment process. The four-star wide receiver from DeSoto, Texas is the sixth-ranked player at his position in the Class of 2023 and committed to Texas late last month.

Cook, who averages around 15 yards every time he touches the ball, chose the Longhorns over offers from Alabama, Michigan, Ole Miss, LSU, USC and countless others. He also chose the flagship university over Texas A&M.

Over the course of his recruitment, Cook took a few official visits over the last few months. As he traveled from school to school, he had a videographer follow him around and provide a glimpse into the process. And along the way, Cook roasted both Texas and Texas A&M for a lack of football trophies before finally finding some at Alabama.

Now that Cook has made his decision, he is not holding back. He and five-star wide receiver Evan Stewart, who is committed to the Aggies, recently went head-to-head in a race.

Not only did Cook win a race against his now in-state rival, he made sure to let Stewart know.

Johntay Cook Vs Evan Stewart in what looks to be a 40 yard race. Johntay Cook squeezes out the win. Evan Stewart is a 10.6 FAT 100m guy. Both guys are lightening on the field 🤝 Via 📷:Jakefischer pic.twitter.com/swwTJhP3Ph

In addition, Cook made a big statement about Stewart’s future at A&M and did not hold back on the Aggies’ offense. The Texas commit said that Stewart is destined to end up in the transfer portal after getting to College Station. He even went so far as to say that Stewart will get only 14 catches and mostly block.

Texas and Texas A&M don’t play each other this fall but the bad blood is very real!