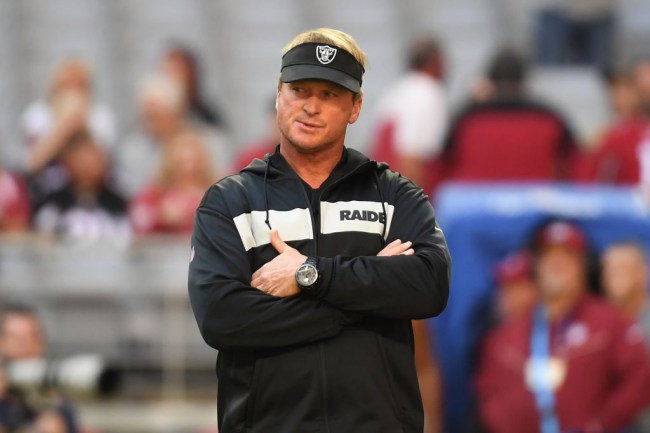 The Raiders and Jon Gruden had to know they were taking a bit of a risk when they decided to trade for Antonio Brown in the offseason but there’s no way they could have ever anticipated just how big of a thorn in their side the diva would ultimately be.

We got our first hint that all was not well in Oakland after Brown threw a temper tantrum when the NFL informed him that he’d no longer be allowed to wear his helmet of choice and things eventually reached a boiling point when the wide receiver was fined for missing practices before getting into a heated confrontation with GM Mike Mayock.

There were rumors Brown would be suspended for the altercation but it appeared Gruden was fully supportive of the superstar even after he posted a bizarre video featuring a conversation he recorded with his coach, who gave him the seal of approval before it hit the internet.

However, the two parties were ultimately unable to overcome their irreconcilable differences, and over the weekend, Brown was signed by the Patriots after being released by the Raiders, who still managed to beat the Broncos on Monday night despite his absence.

After the game, Gruden was asked to address the situation and it appears he’s officially fed up with talking about it, as he briefly reflected on the saga before saying he’ll never address it again.

“As much as ppl talk about it. My god, I feel like someone’s smashing my temple on the side of my head…

We’re gonna be fine w/o him. We wish him the best. We gave it a shot & now NE gets their turn. Good luck to them but I can deal w/it anymore.” pic.twitter.com/QTLgfG28nm

Here’s a full transcript of his comments via NBC Sports:

“As much as people talk about it, I mean, my god.

Man, I feel like someone smashed me in my temple on the side of the head. Get over it, man. It’s over. You know? We were good in the preseason without him. We’re going to be fine without him. And we wish him the best.

“You know, we gave it a shot. Now New England gets their turn. Good luck to them. I can’t deal with it anymore.”

I can’t say I blame him.