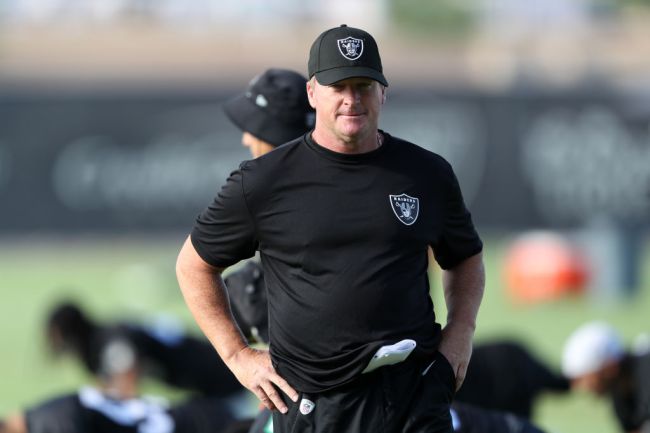 Jon Gruden was apparently getting ready to settle down in Las Vegas before losing his job after getting amid a leaked email scandal.

On Monday night, Gruden resigned as the Raiders head coach after old emails revealed he used homophobic language to mock NFL commissioner Roger Goodell less than a week after other emails showed him making a racist comment towards NFLPA exec Demaurice Smith.

Jon Gruden spoke with #Raiders owner Mark Davis a short time ago to inform Davis of his decision. It's official. Gruden is out in Las Vegas. https://t.co/zkzkVryyfe

Just last month, Gruden had finished building a $4.3 million home in Southern Highlands near other Raiders players including QB Derek Carr, who is currently his neighbor.

Las Vegas Raiders coach Jon Gruden and his wife, Cindy, have finally closed on their new Southern Highlands home at a price tag of $4.31 million.

Real Estate Millions reported in September 2019 that Gruden and quarterback Derek Carr were building new homes next to each other in the 1,000-home exclusive enclave surrounding Southern Highlands Golf Club.

The two-story home, which has two lots totaling about 1.7 acres, sits on a lot that measures 0.77 acres. It has 6,850 square feet on the first floor, 1,834 square feet on the second floor and a garage measuring 1,938 square feet, according to county property records.

The home has five bedrooms, five full bathrooms and two half bathrooms.

Here’s a look at Gruden’s home in Vegas.