It Sure Seems Like Jon Gruden Has A Major Man Crush On Kyler Murray, Guys 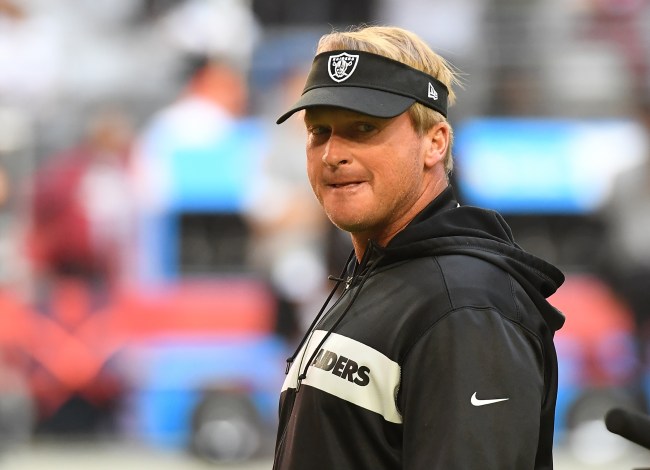 Jon Gruden is supposed to be a quarterback guru. It’s one of the reasons why, while still working for ESPN, the network gave him his own pre-NFL Draft show called Gruden’s QB Camp, which had the Super Bowl winning coach sitting in a room and pushing hopeful NFL players to the limit by asking them questions during film study and testing their knowledge to evaluate the prospect. It was pretty cool, and definitely a unique look at what players go through leading up to the draft.

Since he’s taken over the Oakland Raiders, though, Jon Gruden hasn’t had the chance to pick “his” starting quarterback, taking over a team with an incumbent starter, Derek Carr, who had just signed a huge extension the year prior to Gruden returning to the sideline. Following a terrible 2018 season that led the team to the No. 4 overall pick, along with two other first-round selections through trades — Nos. 24 and 27 — Gruden might be looking at choosing the guy he wants to groom under center for the next decade.

And, the way Jon Gruden’s gushing about Heisman Trophy winner Kyler Murray, it sure sounds as if he’s the guy the Raiders very well could select with one of those trio of first-round picks. Just listen to what NFL.com reported the head coach saying after he studied film of Murray during his college days at Oklahoma.

“I used to think that a lot, until I saw Drew Brees twice a year in Tampa, then I met Russell Wilson coming out of N.C. State, and now I’m watching this kid, (Kyler) Murray, coming out of Oklahoma and I’m putting away all the prototypes I once had,” Gruden said. “I used to have a prototype for hand size, height, arm strength, all that stuff.”

As Jon Gruden admits above, guys like Brees and Wilson — both under six-feet tall — don’t fit the mold of a franchise quarterback in many teams’ eyes, who prefer a big, tall player with a rocket arm. Given the success of those two, Jon Gruden seems like he’s intrigued by the prospect of having Kyler Murray join the Oakland Raiders; or at least is open to going against his former beliefs.

While hosting Gruden’s QB Camp, Jon Gruden fell in love with pretty much every signal-caller he hosted, which makes sense because he didn’t have any skin in the game. But now that he’s a head coach, is he really prepared to risk the future of the franchise — and, possibly, his job — by taking a gamble on a freakish talent like Kyler Murray? As of right now, it sure sounds as if Murray’s gotten his attention for him to seriously consider it.